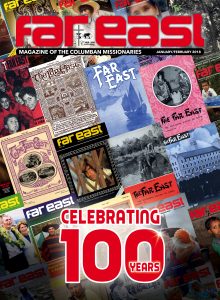 The oldest Catholic mission magazine in Ireland is celebrating 100 years of continuous publication this month.

The Far East magazine was first published in January 1918 by the Missionary Society of St Columban, which was originally known as the Maynooth Mission to China.

The Society was co-founded by Bishop Edward Galvin and Fr John Blowick in the wake of the 1916 Rising.

“Millions of Chinese to be won for Christ!” was the prize that enchanted a small group of Irish secular priests.

On 10 October 1916, the Bishops of Ireland gave their approval for the new missionary endeavour, granting permission for the founding of a missionary college in Ireland. It was initially located at Dalgan Park, Shrule, Co. Galway.

In 1918, two years after the Irish Bishops’ approval, the Maynooth Mission to China was formally recognised by the Vatican.

The Congregation of the Missionary Sisters of St Columban was established in 1924. The founders of the Congregation were Fr John Blowick and Lady Frances Moloney, who later became Mother Mary Patrick.

At the opening Mass for the Columban Centenary, Superior General Fr Kevin O’Neill said, “Since that first invitation for the people of Ireland to participate in the new mission enterprise, the Society has been forever grateful to the very generous spirit of our benefactors, many of whom are subscribers to the Far East magazine, without whose prayers and support we would not be celebrating our Centenary.”

Separately, in the editorial of the centenary issue, the regional director of the Columbans in Ireland Fr Pat Raleigh states, “Our work would not have been possible were it not for the generosity of the people of Ireland. The Far East magazine has been our flagship from the very beginning of the Society and it is still going strong.”

He adds, “We look forward, in a spirit of joy and hope, to participating in God’s mission into the next 100 years.”

The theme for the Columban Centenary celebrations is ‘Sharing Gospel Joy’.

The January/February 2018 centenary issue reproduces a number of covers of past issues of the Far East magazine over the past 100 years. One of these shows the welcoming home of Fr Niall O’Brien in July 1984.

He was one of the infamous ‘Negros Nine’, whom the Filipino dictator Ferdinand Marcos attempted to silence by charging him, along with another priest and six lay workers, with the murder of the mayor of Kabankalan, Pablo Sola.

There was no truth to the charges. The Irish missionary was a thorn in the side of a corrupt and brutal regime which kept its people in dire poverty, and it punished Fr O’Brien for his courage in speaking up for the weakest.

The story gave RTÉ reporter Charlie Bird his first scoop when he interviewed O’Brien from his prison cell in the Philippines. Pressure mounted on the US, which was then the Filipino dictator’s main backer, during Ronald Reagan’s visit to Ireland in June 1984, with Irish politicians joining church leaders in their condemnation of the treatment of the Columban missionary.

Charges against the ‘Negros Nine’ were dropped a month after the US President’s Irish visit, and O’Brien returned to Ireland to a hero’s welcome. 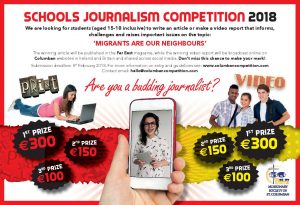 As part of the Columban Centenary (1918–2018) celebrations, the Far East magazine is holding a competition for young journalists.

Students (aged 15–18 inclusive) are invited to write an article or make a video report that informs, challenges and raises important issues on the topic: ‘Migrants Are Our Neighbours’.

The topic recognises the Columbans’ solidarity with and ministry to migrants in Ireland, Britain and worldwide.

The objective of the competition is to encourage students to use their journalistic writing and mobile skills to look at a topical issue which is relevant to Irish society today and resonates with Catholic Social Teaching.

Judges from the world of journalism for the competition for Ireland are:

The closing date for entries is 8 February 2018.

The winning articles and videos will be announced in Columban media on 15 March 2018.

Prizes will be presented by former president of Ireland Dr Mary McAleese on 29 June 2018.