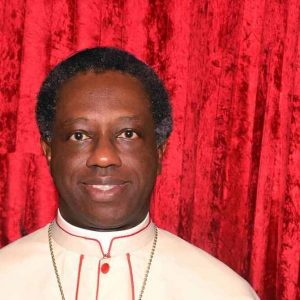 Ireland’s new Apostolic Nuncio is a Nigerian. Archbishop Jude Thaddeus Okolo is the first African to take on the role of the Pope’s representative in Ireland.

The 60-year-old was ordained a priest in 1983, but following postgraduate studies in Rome he was called to the Diplomatic Service of the Holy See in 1990, serving first in Sri Lanka, then in Haiti, the Antillean Islands (which include Trinidad & Tobago, Barbados, Saint Lucia, the Bahamas and Jamaica), Switzerland, the Czech Republic and Australia.

In 2008 he was promoted to the role of Apostolic Nuncio and served as the Pope’s representative in Chad and the Central African Republic, two countries racked by civil war.

Since 2013, he has served as Apostolic Nuncio to the Dominican Republic and Apostolic Delegate in Puerto Rico.

He is Titular Archbishop of Novica, an African province of ancient Rome that is located in modern-day Mauritania. It is expected that he will arrive in Ireland to take up his duties during the summer.

The Primate of All Ireland, Archbishop Eamon Martin of Armagh, reacted with pleasure to the news of the appointment by Pope Francis on Saturday, saying: “I warmly welcome the appointment by His Holiness Pope Francis of Archbishop Jude Thaddeus Okolo as Apostolic Nuncio to Ireland and I wish him many blessings in his new role. Archbishop Okolo’s rich experience in the diplomatic service of the Holy See means that he brings many gifts to bear on his new mission in Ireland. I pray that his time among us as the representative of the Holy Father will be blessed and fruitful.”

The Association of Catholic Priests (ACP) also welcomed the news and wished him well. The ACP’s leadership team commented: “One of his first tasks will be the appointment of a number of bishops, including to dioceses vacant for some years. Our hope is that those chosen will reflect the very different style of leadership being modelled by Pope Francis.”

Notably, Archbishop Okolo could be said to have the gift of speaking in tongues, for he is fluent in his native Igbo and in English, French, Italian, Czech, Spanish and German. Whether he adds Irish to his repertoire remains to be seen, but either way, let us offer him a céad míle fáilte!