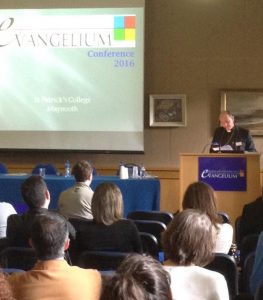 We need a new evangelization in Ireland, Bishop Alphonsus Cullinan, Bishop of Waterford and Lismore, said at the 2016 Evangelium Conference in Maynooth.

He noted that there are green shoots of faith which the Spirit is making grow and which are “examples of the New Evangelization” called for many years ago by John Paul II.

He listed some of them stating: “ This [last] weekend there are several wonderful faith events – the Focolare Mariapolis in Dungarvan with around 250 participants, the Youth 2000 summer retreat in Roscrea with something around 800, the Knockadoon Fith Camp run by the Dominicans, eight men ordained for the Dominican Order yesterday and now here in Maynooth the Evangelium Conference.”

John Paul II used the words ‘new evangelization’ for the first time in June 1979 on his first visit as Pope to Poland in a communist area, called Nova Huta, in Krakow, which had excluded any religious buildings and churches. Later in 1983 in Port au Prince in Haiti John Paul II called for a new evangelization of the Americas and again in 1992.

Now Europe has become tired in the faith in many places, said Bishop Cullinan who then spoke of Ireland stating:
“We need a new evangelization here in Ireland.  We all know that Irish society faces real and present challenges, and on many fronts,” he said.

The Bishop went on to point out that in Ireland at the moment “faithful Catholics” are in the minority.

“We can point to recent referenda to prove our case,” he said.  To address this he suggested that the young people present in Maynooth for the Evangelium Conference learn from Pope Benedict XVI who coined the phrase the ‘creative minority’.

In an interview Pope Benedict said: “I would say that normally it is the creative minorities that determine the future, and in this sense the Catholic Church must understand itself as a creative minority that has a heritage of values that are not things of the past, but a very living and relevant reality.  The Church must actualize, be present in the public debate, in our struggle for a true concept of liberty and peace.” 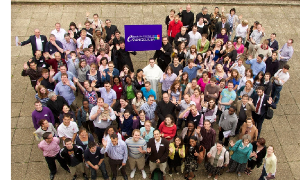 Bishop Cullinan cautioned against the Church ‘circling the wagons’. Rather Benedict’s creative minority strategy means engaging with the world.  Benedict stated that to be an active Catholic in Europe is a choice rather than just social conformity. So in the future practicing European Catholics will be active believers because they have chosen and want to live the Church’s teaching.

Also the creative minority approach attracts non-Catholics who are  convinced that modern society has fundamental problems that cannot be solved by government spending.  Creative minorities will help restore a Christian soul to Europe, and defend Christian values against secularism and relativism.

“This is what we have to tell the world – that life has meaning, ultimate meaning,” said the bishop. “The creative minority’s task is the rebuilding of Christian culture.  This is what the saints did time and again during history.”

He said that the Catholic church must begin by being evangelized herself.

The 3rd annual Evangelium Conference was held from 8th to 10th July 2016 and involved young adults (18 to 35) at the weekend residential conference on the theme of explaining the Catholic faith in the modern world.