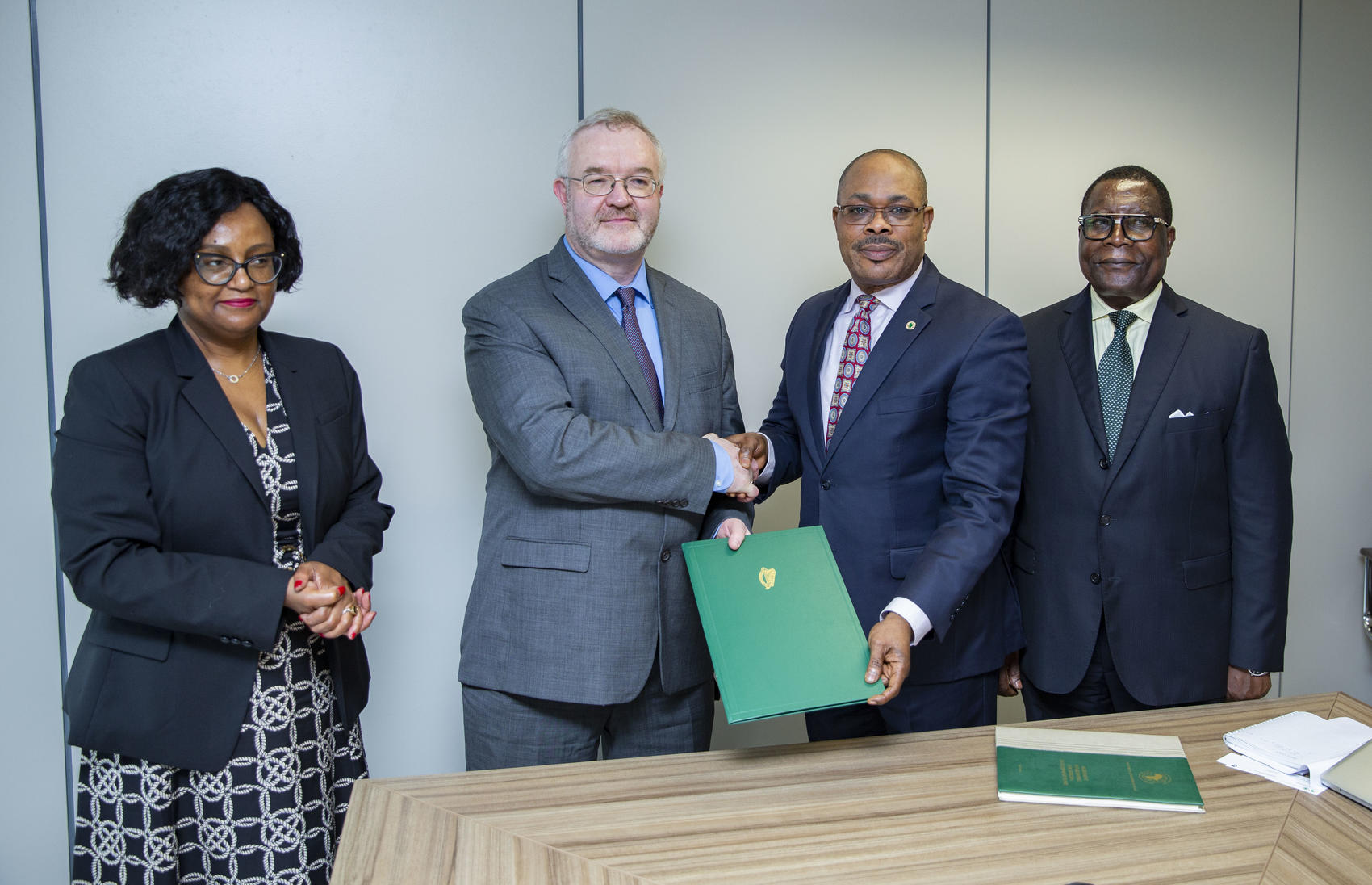 Ireland is close to becoming the 81st member of the African Development Bank Group. An Irish government delegation was present in Abidjan to deposit ratification instruments during an official visit to the bank’s headquarters on Monday 24 February.

“For us, it marks the final moments of our decision to become a member of the African Development Bank Group” said Paul Ryan, Director, International Finance Division of Ireland’s Department of Finance, who led the Irish delegation. “We are excited that we are at the end.”

He explained that Africa has been one of Ireland’s key targets for development cooperation. He said that joining the bank “gives us the opportunity to work with the continent and share knowledge in areas such as financial technology services, energy and climate change,” he said.

Depositing the Instrument of Ratification of the Agreement Establishing the African Development Fund (ADF) is an important step in the process, Vice-President for Finance, Bajabulile “Swazi” Tshabalala stated. “The participation of Ireland will provide many partnership opportunities for Africa’s development, particularly in the energy, climate change and agri-food sectors. Additionally, Ireland is now a knowledge economy, which we as a bank, are looking at in terms of future development on the continent,” Tshabalala added.

Speaking at the meeting, the bank’s Secretary General, Vincent Nmehielle said: “This is a welcome and timely addition to our efforts to help accelerate achievement of the UN Sustainable Development Goals and AU Agenda 2063 by African countries.”

Ireland’s Strategy for Africa to 2025 has a commitment to collaborate with the key financial institution on the continent as well as exploring new partnerships and finance mechanisms for job creation.

The African Development Bank (ADB) Group aims to support sustainable economic development and social progress in its regional member countries, all of which helps to reduce poverty. For example it has backed young people in agriculture in Morocco with funding for leasing extra land and to provide training and equipment to improve farming methods. Young farmers have invested in tractors, irrigation, green houses and packing facilities for fruit such as strawberries and other berries and vegetables produced for European and other export markets.

Another project is the Desert to Power (DtP) Programme, initiated in 2017 with the aim of lighting up and providing power through photovoltaic (PV) solar systems via public, private, grid and off-grid projects.

The Yeleen Rural Electrification Project, involved in the production of off-grid energy in Burkina Faso, is the first project under the DtP initiative which installed capacity of 285 MW in a country where around 3 million households are completely without power.

Ireland’s application to join the ADB Group was approved during the Annual meetings of the Board of Governors of the Bank Group in Malabo, Equatorial Guinea in June 2019.

The membership process for joining  includes signing the agreements establishing the fund and bank, deposit of the instruments of acceptance/approval of the fund and the bank agreements, and the payment of the initial subscriptions to the fund and capital stock of the bank.

The rules also require that a non-African country be a state participant in the ADF, the concessionary lending arm of the bank, before becoming a member of the bank.