Ireland has “a duty to reach out to” refugees with compassion 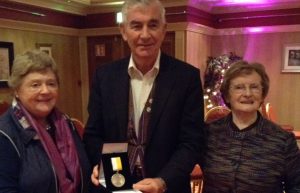 Fr Shay Cullen has described the Hugh O’Flaherty International Humanitarian Award, which was presented to him on Saturday night in Co Kerry, as “a statement that all life is precious, that every person, no matter whose life it is, is of great value and each has invaluable dignity and every one is worth saving”.

In his acceptance speech in Killarney, the Columban missionary said he was accepting the award for those courageous people who resist oppression and whose lives are at risk of summary execution, those abused, the unjustly incarcerated and those who are refugees from war and hunger.

“The award is a message to the world, it is a statement that human rights are of greatest importance and that the lives of the excluded people and the poorest of the poor are of immense worth and that they have a right by their humanity to receive help and support in times of need and danger,” he said.

He added that these were the values driving the PREDA Foundation’s social workers who rescue those abused in jails and brothels and bring them to freedom and safety, free from the power of their abusers.

Fr Shay Cullen received the prestigious award on behalf of the PREDA Foundation, which he set up in 1974 for children he rescued from sex slavery in Subic Bay in the Philippines, where a large US naval base then operated. He was instrumental in getting the naval base closed down.

Today, however, the threat to women and children continues through tourists from western countries, including Ireland, according to the priest.

He told Catholicireland.net that some Irish men were engaging in underage sex in the Philippines, which meant they would be more likely to abuse on their return to Ireland.

Asked about recent comments by the Taoiseach Enda Kenny on pornography, Fr Cullen called on the Government to bring in a law forcing internet service providers to ban child pornography from the web.

“Ireland could lead the way on this and make the internet a safer place for children,” he said.

Referring to concerns over the policies of the new president in the Philippines, Rodrigo Duterte, the missionary warned, “Today, we have a grave situation in the Philippines where the spirit of Monsignor Hugh [O’Flaherty] is needed more than ever. The truth is that state sanctioned executions of young people suspected of being drug users or dealers has reached a high of about 3,500 murdered since 30 June. The killing goes on as I speak to you tonight.”

He stressed, “We have to take a stand against these violations and stand for the value of life and due process of law and the principle that all are innocent until proven guilty. Otherwise not only are more suspects vulnerable but we are all vulnerable if death squads are allowed to have their murderous way.”

He said too many Filipinos believe it is ok for the death squads and police to kill the ‘suspects’.

“Anyone can be branded as a ‘suspect’ and disappeared. It is the end of a country if the rule of law and due process are ignored and the judicial system, faulty as it is, bypassed. Education on the constitutional right to life and freedom is more vital than ever to save the dignity of people.”

Recalling the heroic efforts of Mgr Hugh O’Flaherty to save 6,500 Jews and Allied troops during World War II, Fr Cullen said, “Silence is consent in the face of human rights abuse. We have to take a stand for human dignity and speak out for life and against death. What Mgr Hugh was up against was similar as the Nazi Gestapo in Rome rounded up innocents and executed them because they were seen as different, as inferior human beings and as enemies. They had no value and were to be exterminated.

“The same is going on today in Syria and in Iraq where the commitment and saving action of Mgr Hugh is needed today more than ever.”

He said Ireland could do more to help those fleeing oppression, war and dire poverty, and it had “a duty to reach out to” refugees with compassion, empathy and self-sacrifice. The 73-year-old praised the Government’s pledge to relocate and resettle 4,000 refugees.

“Our mission in years past has been to go out to the developing countries to help the poor and the needy, the endangered and the downtrodden. Nowadays, they are here, coming to us in Ireland and in Europe. They are already among us and we are challenged to have a mission, a duty to reach out to them. Our depth of compassion, empathy and self-sacrifice is challenged by the situation and how well we rise to meet it as Mgr Hugh did.”

He added that the spirit of Mgr Hugh O’Flaherty was ‘Yes’. “He reached out to them in Rome and saved 6,500 people. We can do no less wherever we are, whoever we are.

“We are called to be champions for them, to be a voice for them, and give them a chance for a new life whether they are in the Philippines, in Syria, in Ireland. As Mgr Hugh said, ‘God has no country’.”

Matt Moran – the former president of Misean Cara and author of the recently published, The Legacy of Irish Missionaries Lives On – nominated Fr Cullen for the award.

In his speech on Saturday evening, Mr Moran commended the Hugh O’Flaherty Memorial Committee for their “vision in inaugurating this award in memory of a great humanitarian”.

“The importance and significance of the award is twofold. Not only does it commemorate Mgr O’Flaherty in a fitting manner, but equally important, it is a major recognition of outstanding humanitarians who are at work today.”

He said it was “no accident that during the eight years of this award scheme, four of the recipients have been missionaries … and two of that four have been Columban priests.

“Here we see faith values as the driving force of missionaries, but we also see their need for our encouragement and our support. Hundreds of thousands of Irish people have, and continue to support and encourage our missionaries whose legacy in development and humanitarian work in the global south has been so great that it is simply immeasurable.”

He noted that Fr Shay Cullen has been nominated three times for the Nobel Prize, and has received several recognition awards in a number of countries.

The Dublin-born priest, he said, has endured much opposition, harassment, intimidation, and a failed effort at deportation because he was challenging the status quo of a corrupt elite. “He has and continues to risk his life in service to the poor and marginalised.”

Mgr O’Flaherty also risked his life in service to the Jews and in saving lives during WWII. “I saw the clear link between the lives and work of these two men. That was what motivated me to nominate Fr Shay as a good fit for this award.”

Speaking to CatholicIreland.net on Monday, Fr Cullen said he had no plans to retire, despite his age.

“I am still healthy, active and I keep fit and still have plenty of energy. Of course I will keep going – I am only trying to do good – so when do you retire from doing good as best you can? So I will continue to keep doing what I do as long as I can.”