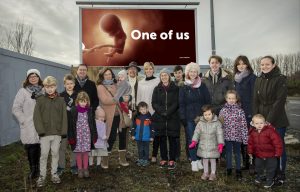 An image of the unborn baby at 11 weeks is at the centre of the Iona Institute’s new national billboard campaign to promote the right to life of the unborn.

With the slogan ‘one of us’, the posters are aimed at showing how human the unborn child is at 11 weeks, and how the baby in the womb is a fellow human being.

“It was extremely noticeable that neither the Citizens’ Assembly nor the Joint Committee on the Eighth Amendment of the Constitution showed images of the baby in the womb at its various stages of development. The unborn child was essentially invisible,” said Maria Steen, speaking on behalf of The Iona Institute.

“When we debate the issue of abortion we must take into account both the mother and the child. We have launched this campaign because those who want to repeal the pro-life amendment constantly ignore or downplay the fact that abortion always ends the life of the child in the womb,” she added. She reiterated that the pro-life amendment protects all human life, beginning at conception and recognises that the baby in the womb is a member of the human family.

“The Joint Committee has recommended abortion for any reason up to 12 weeks – during which time almost all abortions take place – and after that, potentially right up to birth, for reasons of ‘health’, including ‘mental health’,” she said. “Whatever form of abortion law the Government opts for, it cannot be denied that the victim of abortion is a human being.” Maria Steen fears that if the Eighth Amendment is repealed, the law on abortion can subsequently be changed to facilitate all kinds of circumstances.

The initial response to the billboard poster has been positive according to Iona which has also launched an appeal for donations to fund its campaign. One of those who responded said, “Really hit home as I drove by. It lets you know what’s at stake.” Another stated,  “It is a lovely image and I think it will get a lot of people thinking.”

Separately, Love Both Project, has also appealed for funds stating that it is €13,127 short of its €50,000 online target. The group’s Dr Ruth Cullen, has pointed out that if the predicted date for the referendum on abortion proves correct then it will be held on the 25th of May which is only 100 days away.

“This situation is truly urgent. It’s vital that we give this fight everything we have now. More than 5,000 lives every year hang in the balance,” she stated. She urged people to get involved and help win hearts and minds to save the Eighth Amendment.

Tags: citizens’ assembly, Joint Committee on the Eighth Amendment of the Constitution, Love Both Project, Pro-Life Amendment, The Iona Institute