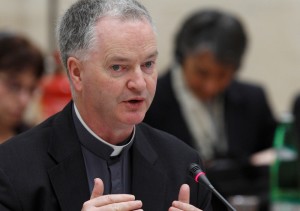 The recent appointment of Mgr Paul Tighe as bishop and secretary of the Holy See’s Council for Culture by Pope Francis came as a “big suprise but a very pleasant one”.

Speaking to CatholicIreland.net, Mgr Tighe said he was “intrigued and happy about going to work in the area of culture” although he was leaving the Pontifical Council for Social Communications “with a certain sadness”.

“I have been very fortunate. I enjoyed my time at the Council for Social Communications and was lucky in having Archbishop Celli as my boss. He taught me and helped me to find my feet in the Vatican.”

At the Pontifical Council for Social Communications he had learnt certain skills, he said, but he felt he had to start all over to understand the remit of the new job at the Council for Culture where he will work as Secretary to Cardinal Gianfranco Ravasi.

“The job of the secretary is to support and help staff to see that things function well. I’ll have to learn.”

Reflecting on the Year of Mercy and its intersection with culture, Mgr Tighe said that the year should contribute not just to the life of the Church but to secular culture.

“Particularly in the digital sphere, culture is marked by very strident criticism and a very judgemental approach. What would a more merciful approach be?” he asked.

“We need to bring this into the mainstream of society – asking for mercy and showing mercy.”

Mgr Tighe said that showing mercy did  not mean turning a blind eye, but “helping people to contribute to society, even those who people are inclined to write off.”

He believed a good model lay in the behaviour of a family.

“In families we learn to love. You see the unconditional love of parents for their children. They never close the door. The opening of the doors of mercy  is like [saying] what occurs in families – the door is always open.”

Mgr Tighe will spend Christmas in Ireland with his own family. “They are all very pleased that they will still have Rome to visit,” he joked.

Bishop-elect Tighe belongs to a large family made up of his mother, two brothers, three sisters and fifteen nephews and nieces.

Mgr Tighe told CatholicIreland.net that he did not know when the service ordaining him bishop would take place, but it was likely the service would be in Rome.

Mgr Tighe worked for eight years as secretary to the Pontifical Council for Social Communications.

As part of his work travelled to Asia, Africa, North and Latin America advising church bodies and church media on best practises in relation to inter-facing with social media.

He was part of the team which promoted the Pope’s twitter handle @Pontifex and developed the very popular ThePopeApp for mobiles, and www.news.va which makes all the Holy See’s media available on one website.