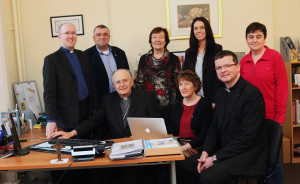 The Kilmore Diocesan Pastoral Centre has marked its tenth anniversary with the launch of a new website which Bishop Leo O’Reilly described as “a gift from God” to the diocese and “to all who wish to access it”.

The centre was established 10 years ago in response to a unanimous call at the 2000 Kilmore Diocesan Congress for the establishment of a centre to meet the needs of the new models of parish and Church where there was full lay participation, helping people wanted to learn more about their faith and to deepen it.

Since its establishment, the centre has developed and grown, promoting and facilitating ministry and faith development.

Launching the new updated website, www.kilmoredpc.ie Bishop O’Reilly quoted Pope Francis who wrote, “The internet, in particular, offers immense possibilities for encounter and solidarity. This is something truly good, a gift from God.”

The Bishop of Kilmore said the new website is one such possibility. “It is a gift from God to our diocese and to all who wish to access it”.

He thanked the Director of the Pastoral Centre, Sean Coll, for co-ordinating the creation of “this very important means of communication”.

Responding, Seán Coll said “the development of a good communications strategy is critical to ensure the success of what we do in the Diocesan Pastoral Centre.”

He added that “The availability of the website, our presence on other social media such as Facebook and Twitter, and the publication of our newsletter ‘Glad Tidings’ three times a year, will help in that regard.”

He thanked those who developed and maintained the initial website over the past number of years and hoped that the updated site would prove to be an effective means of sharing information about events and activities in the Centre to a wider audience and will always be, in a sense, ‘work in progress’.

Tribute was paid to Sandor Gera and his team at GetOnline Pro (Web Development and Web Design) who worked on redesigning the website which, he said, will support and promote the activities of the centre as well as other pastoral initiatives throughout the diocese of Kilmore.

He said that he was keen to ensure the website would prove to be an interesting, user-friendly and useful resource for the priests, religious and people of the diocese and further afield and would welcome feedback on its content and future development.