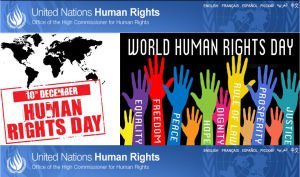 The Irish Bishops Conference has called for the protection of the human rights and dignity of every person, particularly those living in poverty, asylum seekers living in Ireland, other displaced people around the world, and those who have been trafficked.

This year, the United Nation’s Refugee Agency reported that the number of displaced persons has surpassed 50 million for the first time since the Second World War (Annual Report 2013).

In a statement to mark International Human Rights Day today, the bishops called for urgent action to protect the rights of the rapidly growing number of refugees, asylum-seekers and displaced persons throughout the world.

As the humanitarian crises responsible for this displacement intensify and deepen, International Human Rights Day provides a reminder of the commitment of the international community to the protection of human rights and the dignity of the human person.

In their statement, the Irish bishops recalled Pope Francis’ recent address to the European Parliament on 25 November when the Pontiff appealed for a united response to the question of migration.

“We cannot allow the Mediterranean to become a vast cemetery! The boats landing daily on the shores of Europe are filled with men and women who need acceptance and assistance,” the Pope exhorted.

He added that the absence of mutual support within the EU ran the risk of encouraging particularistic solutions to the problem, solutions which fail to take into account the human dignity of immigrants, and thus contribute to slave labour and continuing social tensions.

Elsewhere in their statement, the bishops appealed to the Government to take “urgent action” on behalf of those who have spent more than five years in direct provision.

The hierarchy also expressed particular concern for children trapped in the system of direct provision who are prevented from experiencing normal family life at a critical stage in their development.

Though the bishops reiterated their welcome for the working group on Direct Provision which was established by the Minister for Justice & Equality Frances Fitzgerald in October, they said more must be done to prioritise the needs of those in the system long-term.

These also prevented them from working and integrating in society.

In Evangelii Gaudium, they pointed out, Pope Francis appeals to all countries for “a generous openness” which recognises how migration and cultural diversity can enrich our lives.

They also underline that the Holy Family was a family forced to flee for protection. “We pray for all those who find themselves displaced from their homes, that they may find peace, safety and welcome,” they said in their statement on Tuesday.

They referred to the “devastating consequences” of the international community’s failure to protect civilian populations caught up in armed conflict in places such as Syria, South Sudan Ukraine.

“In recent months we have witnessed the terrifying images, most notably from Iraq, of people forced to flee because of the denial of freedom of conscience and religion,” they said.

About 13.6 million people, over twice the population of the island of Ireland, have been displaced by conflicts in Syria and Iraq, and many are without food or shelter as winter starts.

Aid agency Trócaire works with Syrian refugees in Jordan and Lebanon who have suffered horrific abuses including the rape of women and girls, fathers and sons killed or ‘disappeared’, and houses destroyed by bombs.

Trócaire’s experience in working in some of the poorest, most conflict affected countries in the world shows that the responsibility for supporting people displaced by conflict and by man-made disasters is almost entirely met by communities and States which cannot meet the basic needs of their own people.

According to the UN, over 80% of refugees worldwide are hosted by developing countries.

They warn that after over three years of taking in more refugees per capita than any other country in the world, Lebanon and Jordan cannot cope with more refugees and borders are closing.

To our collective shame, countries outside the region have only agreed to receive a total of about 50,000 refugees from Syria – less than 2% of the total number of Syrian refugees.

The bishops also highlight that for displaced persons, the initial violence is frequently compounded by homelessness, poverty, unemployment and the threat of further violence.

Foremost amongst these are the traffickers who coerce the vulnerable into various forms of slavery, but there are many more who “have blood on their hands as a result of their comfortable and silent complicity” (Evangelii Gaudium, 210).

Working with those displaced by conflict in South Sudan, Trócaire has experienced first-hand how such intense contexts lead to gross violations of the human rights of those displaced, as well as the host community: protection of women and children from violence and abuse is imperative, as well as meeting the basic needs of people to live with dignity and in safety.

The bishops paid tribute to the courage of those who risk their lives working in dangerous conditions to defend the rights of the most vulnerable.