Interfaith prayer for planet is powerful witness to global family 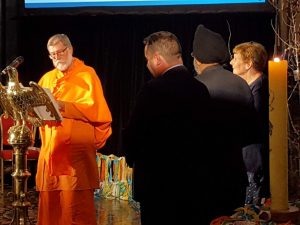 Interfaith prayer for the planet at Christ Church, 24 August 2018

In perhaps a first for a World Meeting of Families, representatives of seven world religions came together to pray last week for the planet.

At the end of the packed service in Christ Church Cathedral, Bishop William Crean, Chairman of Trócaire, announced the divestment by the Catholic Bishops’ Conference from fossil fuels.

The service, based around Pope Francis’ Laudato Si’,  began with the lighting of the Climate Justice candle, which had been in the RDS, serving as a focal point for prayers for the Common Home. Members of the Jewish and Buddhist communities read excerpts from Jewish scripture and Buddhist writings praising creation.

In  the second part, looking at the world from a scientific point of view, Dr Cara Augustenborg, an environmental scientist, spoke of the rise of CO2 in the atmosphere, which is on a trajectory to cause a 4 degree increase in temperature by the end of the century.

“It is a challenge to explain the science. If I tell you of the hard reality, you may be depressed or immobilised by the size of the problem. If I tell you there are solutions, it may give you a false sense of hope that we don’t need to urgently alter our life styles, which we do need to do.”

Faith and spirituality become key to solving climate change, she continued, because what we need right now is courage. Tokenism is not enough. “Courage is the resolve to do well without the insurance of a happy ending.”

As an example of the “new generation of courageous climate activists”, Dr Augustenborg introduced Flossie Donnelly, an eleven-year-old blogger, who cleans the beach at Sandycove every week. On holiday in Thailand, Flossie was horrified to see plastic on the beaches. “I didn’t want my country to become like Thailand and I started beach cleaning,” she told the gathering. Through social media, the local council and her blog, www.flossieandthebeachcleaners.com, others now join her each week on the beach clean.

Fr Pat Clarke, a Holy Ghost missionary working in Amazonia, spoke of the destruction of the Amazon rainforest. “Now on the ground, the Amazon is burning, hostage to reckless mining, logging, poaching, agri-business and murder,” he said. The recent murder of a tribe leader was the 80th since 2000.

In the third section of the programme, on ‘Lament and Repentence’ for the injury done to Our Common Home, members of the Hindu, Bahai, Sikh and Muslim communities read reflections and Cardinal John Dew of New Zealand addressed the service. “The golden rule of social conduct and the first principle of the whole ethical and social order is the universal destination of goods and thus the right of everyone to their use,” he said.

Each section was punctuated with beautiful music – ‘The Canticle of the Sun’, sung by Niamh Murray, the haunting ‘Colours of the Wind’, sung by Muireann Hayden, an Irish lament, played on violin by Pauline Johnson and ‘One World, One Home’ sung by Factor One. 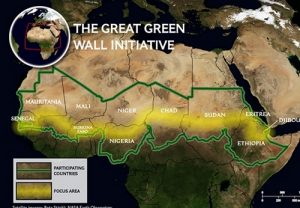 In the fourth part: ‘Change and Act’, Elvis Paul Tangem from the African Union spoke of the terrible challenges faced in Africa.

“We are at a tipping point,” he said, but projects like the Great Green Wall were providing an “epic solution”.

This flagship initiative to combat climate change and desertification has involved the planting of trees across North Africa and the Sahel.

“More than planting trees it is a mosaic of intervention that is helping to build community resilience and economic opportunities. It is a symbol of hope that we can build safer and more secure communities in the face of poverty, war, terrorism and all forms of insecurity.”

Speaking after the service, Mr Tangem told CatholicIreland that the interfaith prayer was significant. “To get all these clergymen, religious leaders talking about the need for environmental sustainability – for us to take care of our common home – you can’t ask for more. It’s absolutely important,” he said.

Swami Purnananda Puri, spiritual director of Eire Vedanta Society (Hindu), said it had to be brought forward and “make an impact. Sentiment is one thing but how to make a change is another. So I hope this has inspired people to do it,” he told CatholicIreland.

A member of the Mormons, Onyie Onyeabor from Utah, who came to the service by chance, was impressed by the unity among the faiths. “It was cool to learn about the different projects like the Great Green Wall and to think that all these faith organisations came together and are talking about the one global family.”

“It was lovely to see that we all have those same thoughts in common. We have to do something for the environment,” said Diana Stahl, from the Church of Scientology. “It is our home, home for all of us, regardless of what faith or background we come from.”

The interfaith reflection and prayer for the planet was sponsored by the SMA, Focolare, Trócaire, Dublin City Interfaith Forum, Eco-Congregations Ireland, the Laudato Tree Project, The Global Catholic Climate Movement, WMOF18, the Tree Council and the UN Convention to Combat Desertification.