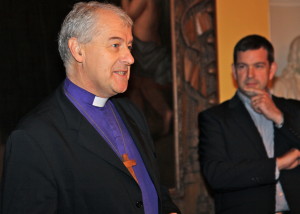 The Dublin City Interfaith Forum (DCIF) has expressed its “deep concern” at the recent circulation of a “provocative hate letter” to schools and mosques in Dublin.

In a statement, the DCIF said the “ugly and semiliterate letter constitutes an offence to all citizens of Ireland and especially to our Muslim brothers and sisters.”

The Forum said the letter was a deliberate attempt by “a tiny, hate-fuelled and totally unrepresentative group of people” to promote a breakdown in social solidarity and community cooperation.

He said good relations make for stable society and such stability is based on giving the same level of respect we should like to receive – and a bit more.

“Yesterday’s stranger is today’s neighbour and we do not want to treat today’s neighbour as tomorrow’s enemy,” he said as he appealed for “courtesy and cordiality in all our relationships and most of all for understanding and dignity.”

The Dublin City Interfaith Forum called on people of all faiths to “stand up to and utterly reject the threatening, violent and pernicious voices in our society who are determined, for their own self–serving reasons, to create a society which would refuse to acknowledge that a multitude of choices exist.”

The Forum urged political parties “to not only resist the temptation to climb on board the anti–minority bandwagon but to actively reject all those who would attempt to do so.”

Referring to the rise of extremist factions of various political shades in the UK, the DCIF said this had led to representatives of normally moderate, mainstream political parties voice deeply insulting, unfounded and divisive accusations against minority communities simply motivated by a cowardly fear of losing votes to extremists.

Condemning any actions which endanger the capacity of people of different origins, cultures and religions to live in harmony together, the DCIF said it was actively working to build relationships based on understanding and respect among Dublin’s diverse faith communities.

The group also condemned any incitement to hatred and division. “Respect for and acceptance of the rights of all citizens to practise their religious beliefs in peace and harmony and the rejection of violence are the cornerstones of any society that wishes to claim to be democratic, modern or indeed truly human,” the DCIF said.

It added that it is up to every one, individually and collectively, to work together to create such a society.