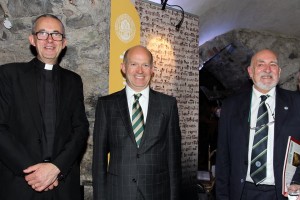 Christ Church Cathedral Dublin has joined the worldwide celebrations of the 800th anniversary of the signing of Magna Carta with the launch of a new interactive exhibition in its Crypt.

The exhibition was officially opened on Thursday June 5 by the British Ambassador to Ireland, Dominick Chilcott CMG.

The centrepiece of the exhibition is the cathedral’s 14th century copy of Magna Carta.

The ancient document is contained within Christ Church’s Liber Niger or ‘Black Book’ – an eclectic mix of literary, theological, administrative and annalistic material created by the Canons of Christ Church.

The exhibition was launched following Choral Evensong at which the Dean, the Very Revd Dermot Dunne, presided in the presence of Archbishop Michael Jackson.

Launching Magna Carta at Christ Church, Ambassador Chilcott said that the document continued to shape our daily lives 800 years after it was signed.

He doubted whether King John and the barons who signed Magna Carta at Runnymede thought that it would shape modern democracy and the rule of law.

He cautioned against exaggerating the contents of Magna Carta and pointed out that as a 13th century peace treaty it was a failure. It was revoked by the Pope and England was plunged into civil war. 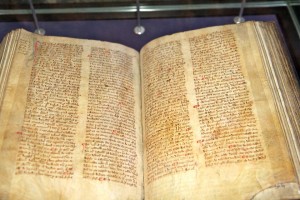 The Barons were trying to solve the problem of defective kingship.

“But they also put down the foundations on which many have continued to build to this day… There are only four original copies of Magna Carta extant and the only original copy of Magna Carta Hiberniae was destroyed in an explosion at the Four Courts in 1922 so the Libre Niger is even more important,” he stated before urging people to check their attics for copies of the Irish version of the Great Charter which was probably presented to every cathedral at the time.

Introducing the evening, Dean Dunne spoke about the cathedral’s interactive exhibition which he said explained the significance of Magna Carta from 1215 to the present day, the importance of Christ Church’s special copy and how Magna Carta was, and still is, relevant in Ireland. He thanked all who played a part in bringing the exhibition to fruition.

Dr Kenneth Milne, the cathedral’s Keeper of the Archives, outlined the history of Magna Carta and its links to Ireland.

The Archbishop of Dublin, Henry of London, was present at the negotiations between the barons and King John and his name appears as one of the witnesses to the document’s signing.

He also highlighted the connection between the English Crown and Christ Church Cathedral. Dr Milne said the Libre Niger was a volume of immense significance. 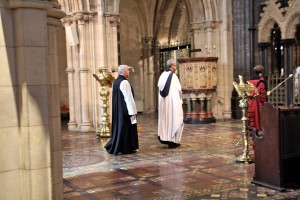 The effects of Magna Carta are still felt today with the 1215 document credited with enshrining the rights of man forever.

It established the principle that everyone, even the king, is subject to the law and guaranteeing all subjects the right to a free trial.

Its foundation principles are seen in the 1791 American Bill of Rights and the Universal Declaration of Human Rights, penned after the Second World War.

Alongside the exhibition in the Crypt, the cathedral will be organising a series of public events on the theme of human rights with high profile speakers, historical lunchtime lectures, free workshops for schools, calligraphy classes and much more.