Home > News > New archbishop sets out his priorities for ministry

New archbishop sets out his priorities for ministry 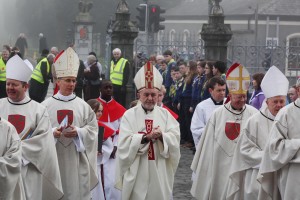 Installation of Archbishop Kieran O’Reilly at teh Cathedral of the Assumption Thurles. PIc: John McElroy.

My journey as bishop of Cashel & Emly begins today, Archbishop Kieran O’Reilly said on Sunday as he outlined his key tasks as a diocesan bishop as laid down by Pope Francis in Evangelii Gaudium.

In his homily for his formal installation in the Cathedral of the Assumption in Thurles, the Archbishop said he was asked by his predecessor Archbishop Dermot Clifford at the moment of installation “to preach the Word of God”.

He said he took this commission as a priority for the years of his ministry in the archdiocese and he invited the people of Cashel & Emly to “set out on a journey to become more familiar with the Word of God and its life-giving power.”

The newly installed archbishop’s second priority would be human trafficking and he invited his new flock to become co-workers with him in tackling this issue and “opening eyes to the reality that trafficking may be happening around us in our local communities”.

His third priority would be to fulfil the tasks as set out in the Pope’s blueprint for diocesan bishops.

He said the Pope had underlined that each local Church must make its missionary impulse ever more focused, generous and fruitful, and the Pope encouraged them to undertake “a resolute process of discernment, purification and reform”. 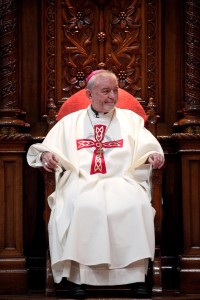 “To do this he will sometimes go before his people, pointing the way and keeping their hope vibrant. At other times he will simply be in their midst with his unassuming and merciful presence. And yet other times, he will have to walk after them, helping those who lag behind and above all – allowing the flock to strike out on new paths.”

Speaking on the first international day for awareness of human trafficking in the Church, the former Bishop of Killaloe paid tribute to St Josephine Bakhita, the Canossian nun who was saved from slavery in Sudan after many years of hardship.

“She puts a face on the words of Job,” he said in a reference to the First Reading and to those in the world caught in a life of misery and sadness.

He told the congregation which included the Fine Gael Minister for State, Tom Hayes, Fianna Fáil leader, Micheál Martin, and other TDs as well as sporting and civic representatives, “Irish people are directly or indirectly encountering the victims of trafficking”.

He added, “We need to ensure we are part of the solution and not the problem”.

The 62-year-old Cork-born prelate said, “We have a responsibility to effectively challenge and tackle trafficking which exists in Europe because wealthy countries are a source of demand for human trafficking.”

Referring to his time as a missionary in Liberia and Nigeria, he admitted “I too have seen young people treated as slaves in the houses of wealthy people when I worked on mission and the sadness in their eyes haunts me to this day – could I have done or said something that might have changed the quality of their lives?”

“Can we remain alert to those who may be in our midst and who may be treated in a way that is beneath their human dignity?”

The ceremony was con-celebrated by the papal nuncio, Archbishop Charles Brown, the Primate of All Ireland, Archbishop Eamon Martin, Archbishop Michael Neary, and Archbishop Dermot Clifford as well as over ten other members of the Irish hierarchy.

The packed cathedral heard the former Bishop of Killaloe urge his new flock to journey together with him.

In his words of welcome to his successor at the beginning of the ceremony, Archbishop Clifford recalled the day twenty-eight years previously when he had knelt where Archbishop O’Reilly was kneeling.

He said his motto in retirement would be “Ever ready, but never in the way”.

In a tribute to Archbishop O’Reilly, he said he was a man of many talents known for his gentleness and humility.

Archbishop Clifford joked that Archbishop O’Reilly would much busier in his new diocese even though it had 12 fewer parishes than Killaloe’s 58 and a population which was smaller by 30,000 people.

Before entering the Cathedral of the Assumption at the start of the ceremony, Archbishop O’Reilly was met at the doors by Fr Christy O’Dwyer, Dean of the diocesan consultors, who welcomed him and presented him with his cross as a sign that he was being entrusted with the pastoral care of the Church in Cashel & Emly.