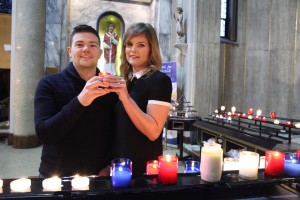 Engaged couple Deirdre Eighan and Sean Whelan at the shrine of St Valentine in the Church of Our Lady of Mount Carmel Whitefriar Street in Dublin having had a blessing from Bishop Denis Nulty Bishop of Kildare and Leighlin. Pic John Mc Elroy.

The President of Accord, Bishop Denis Nulty, has said he is “very heartened” that the number of couples who undertake an Accord marriage preparation course continues to increase.

However, the new data also shows that the numbers who attended Accord for counselling has decreased from a peak in 2010.

Welcoming the research and analysis by Amárach Research into what is going on in relationships before couples come to Accord, Bishop Nulty said it “greatly enhances the value of counselling for those who require it”.

He said a “few red line issues” stood out for him in the findings.

One of these is that breakdown of communication continues to be a key problem which leads couples and individuals to need the services and support of Accord.

“We shouldn’t be surprised at this; when a couple stop talking, all they hear is the sound of silence, and this in itself is a huge contributory factor to stress and anxiety in a relationship,” Dr Nulty said.

He highlighted that the breakdown of communication defined as “not listening” or “being ignored”, has sadly increased in its relevance for couples from 48% to 58% in the past nine years.

Dr Nulty added that it is also interesting to note the increasing high incidence of telecommunications related problems.

“Perhaps in time to come the effect of Instagram, Snapchat or tweeting in the relationships of today will become more evident.”

“It seems to suggest the more communicative devices we have in life, the less communicative we are in our relationships,” the bishop commented.

He also underlined that a good sacramental marriage preparation course allows an individual or a couple to identify triggers in their relationship that could lead to a breakdown in communication.

“Good skills learned on a course will stand to a couple for life.” 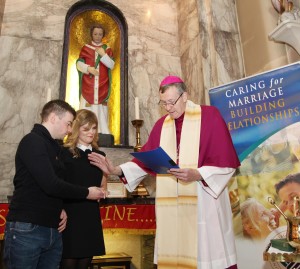 Bishop Denis Nulty, President of Accord, blessing engaged couple Deirdre Eighan and Sean Whelan at the shrine of St Valentine in the Church of Our Lady of Mount Carmel Whitefriar Street. Pic John Mc Elroy.

The Bishop said it was important to understand how damaging criticisms and insults can be in a relationship – “they poison a relationship”, he warned.

Dr Nulty on Tuesday blessed engaged couple Deirdre Eighan from Rochfortbridge, Mullingar, and Sean Whelan from Ballinea, Mullingar at the shrine where the relics of St Valentine are housed in Whitefriar Street Church in Dublin.

Deirdre works for Aer Lingus as a member of its cabin crew and Sean is a personal insurance advisor with insurer FBD.

The couple met when they were attending a repeat Leaving Certificate course in CBS Mullingar, and will be married on 12 May 2017 in St Michael’s Church, Castletown Geoghan in the Diocese of Meath.

The new Accord data shows that the problems facing couples with relationship issues have changed somewhat over time, though communication difficulties remain the most prevalent.

There has been a modest decline in clients presenting with financial problems but other worrying trends are emerging, such as the growing incidence of relationship problems relating to internet and mobile technologies.

The percentage of counselling clients presenting with financial problems as very relevant to their relationship peaked in 2012 as the economy turned, and has still not returned to pre-recession levels.

Both sexual and intimacy issues continue to be recurring problems for up to half of Accord’s clients receiving counselling in recent years, with infidelity affecting up to 20% of clients.

Both use of the Internet and use of phones/texting are increasingly identified as very relevant problems for a growing share of Accord’s counselling clients, up from 4% to 17% over the period 2007-2015.

Combined problems related to addiction (alcohol, drugs, gambling) amounts to 24% among those counselled by ACCORD in 2015

Married couples continue to make up most of ACCORD’s counselling clients, while the percentage share of those who are co-habiting or separated has remained stable over the period.

The vast majority of ACCORD’s counselling clients are Catholic, but the share of those who express no religious affiliation ranges from 2% in 2007 to 7% in 2015.

Since 2012, in excess of 300 ACCORD counsellors provide on an annual basis an average of almost 40,000 sessions of counselling to approximately 9,000 couples and individuals experiencing difficulties in their marriage and relationships.

The data combines results for the Republic of Ireland and Northern Ireland. Some of the presenting problem definitions changed in 2010/11 and so some data covers 2011-2015 only.