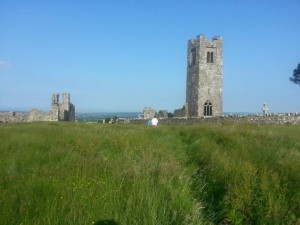 Ireland’s newest pilgrim walk or ‘camino’, which got under way on the 7th July, is set to conclude in Kildare today.

Sixteen people have walked the full camino, while as many as ten others have joined the group each day for a full section.

The Brigid’s Way Celtic Pilgrimage or Slí Bhríde as it is called has seen participants are as far away as Australia, America, Denmark, UK and from all over Ireland take part in the nine-day journey over its 70 miles or so.

Their journey began at St Brigid’s Shrine in Faughart, Co Louth and concludes today at St Brigid’s monastic city in Kildare town. It passed through the Hill of Tara along the way.

Dolores Whelan, one of the people who first had the idea for this Slí Bhríde, spoke to CatholicIreland.net as she set off with the group in Donadee Forest Park.

“It’s been an extraordinary experience. We’ve met wonderful hospitality along the way, people have come out to give us water or asking if we want to use the toilet, or ‘can I get you anything?’ she said.

“We have had magical encounters every day but on the first day we were in a village of Knockbridge in Co Louth and we met a group of teenagers who were sitting around bored in the summer as teenagers are.”

Three of the teenagers accompanied them to the next village and they all had a terrific conversation.

Given that the ages of the walkers ranges from 30 years to around 65, it was good to dialogue with a new generation. “Kids need to be listened to, and they need something to connect with,” Dolores Whelan said.

She added that there had been many encounters like that along the way. There has also been sun cream, sun hats and lots of water since the walk took place in Ireland’s first heat wave in more than a decade. 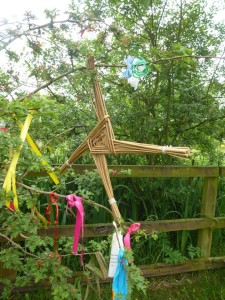 There have also been spiritual moments. The very first day of the camino coincided with pattern day at Faughart, Co Louth and Dolores Whelan was invited to tell the congregation in the church about the pilgrimage and the entire community prayed the pilgrims off on their journey.

There have been moments of prayer and ritual in significant sites like the Hill of Tara, Slane and other holy sites including wells, ancient churches and graveyards.

The people they met along the way have been very taken with the idea of pilgrimage according to Dolores. “They said ‘it is wonderful that you are reactivating the ancient art of pilgrimage’, which is hugely central in our tradition,” she recalled.

Like every good ‘camino’ participants had their card stamped at the beginning and the end.

Dolores Whelan and two others, Karen Ward and Anthony Murphy, planned the route which set off from an ancient site associated with Brigid in Faughart.

Anthony Murphy, who has written several books including Island of the Setting Sun – In Search of Ireland’s Ancient Astronomers  and a new book Newgrange Monument to Immortality, did initial research and found that there is a straight line between Faughart graveyard, Tara and the Curragh, and it intersects many significant historic and holy sites in between.

Dolores Whelan runs Iomlanu Education near Dundalk, and has produced a CD: Ever Ancient, Ever New on Celtic meditation.

She did further research on the Slí Bhríde with Karen Ward who was the holistic therapist presenter on RTE’s Health Squad and runs The Slí an Chroí Holistic Healing Shamanism Centre in Dublin with her husband.

The Brigidine sisters in Kildare provided support and encouragement for the walk which has long been a wish of theirs and they are involved in the concluding ceremonies in Kildare.

There is an open invitation to ‘Walk a mile of Brigid’s Way’ for this last stage today of the pilgrimage on Monday 15th July.

The meeting point is at The Hanged Man bar & restaurant, Milltown at 10:00am.

Along the way there will be meditations, ceremonies and on arrival at Kildare – a warm welcome from the Brigidine Sisters and Kildare Tourism and Heritage. Full details of Slí Bhríde from March on: www.brigidsway.ie