Inaugural service of Week of Prayer recalls barriers to unity 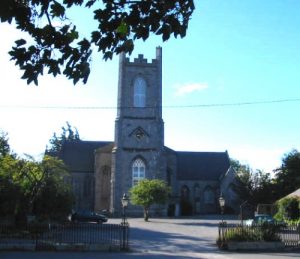 The inaugural service for the Week of Prayer for Christian unity in Dublin took place in Christchurch Church of Ireland, Taney Road, Dublin on Wednesday night.

The theme for this year’s octave (18–25 January 2017) draws its inspiration from 2 Corinthians 5:14–20: “The love of Christ compels us towards reconciliation”.

The texts prepared by the Christian churches of Germany commemorate the 500th Anniversary of the Lutheran Reformation. Entitled ‘Crossing barriers’, they recall, for example, the fall of the Berlin Wall, which became a symbol of hope that, “with the love of God, nothing is impossible or insurmountable”.

During the service on Wednesday night, members of a variety of Christian churches carried up large grey boxes of stones representing division to unity: lack of love, hate and contempt, false accusation, discrimination, persecution, abuse of power, isolation and pride.

At the end of the ceremony, the leader in prayer said: “Lord our God, look upon this wall that we have built which separates us from you and from one another. Help us to overcome all walls of division and make us one in you.”

Maria Rosa Logozo from the Catholic parish of Milltown was one of the hundred or so participants. “It is a great thing to live the week of prayer together. I felt Christ was urging me on in that lovely family atmosphere,” she told CatholicIreland.net, adding that she was sorry there were not more people present to experience it.

Lutheran pastor, Martin Sauter, also at the ceremony, said many areas of Dublin city take the week of prayer “very seriously”. He said that “As regards widening its appeal, I think practising it in your respective own contexts, reaching out to people of different denominations/traditions and doing prayer events well and beautifully are good ways.”

With all the Catholic bishops away on their ad limina trip to Rome this week, this year’s event has been low key from the point of view of the Catholic Church. Only the archdioceses of Dublin and Armagh appear to be marking the week with formal ecumenical events.

Fr Martin Browne OSB, who is on the editing committee overseeing the materials for the Week of Prayer, says the event “can still happen” even if there are no ecumenical events in an area. “What counts is to pray for Christian unity,” he told CatholicIreland. “I would like the week to be part of the consciousness of individual parishes and for them to use the materials each day at Mass.” This is happening in a small number of parishes, like Milltown.

Dr Joan Back, a member of the Irish Interchurch Meeting, who was at the inaugural service, said the service was conducted with solemnity and intent. “When you pray on these occasions, you feel there is unity among us and then when you go for a cup of tea afterwards, you feel like one family,” she told CatholicIreland.

Dr Back said that at an institutional level the churches were drawing closer together and there have been significant breakthroughs which “often go unnoticed”.

She cited as one of these the presence of Pope Francis at Lund Cathedral, Sweden, in October 2016. “The whole tone of that event was ‘We are celebrating our newly found fraternity and our love for Christ’. We’ve come so far. I could never have dreamt of the Pope going to Lund to celebrate the 500th anniversary of the Reformation.”

Dr Sauter agrees. “Of course, there are always new challenges as history moves on and the issues and questions change, and with them the perspectives, but I think there is a growing trust between an ever widening circle of churches that will listen to one another, consult and be honest with each other in a mutually respectful way.”

He added, “I think the rapidly secularising society in which we live, at least in the West, will help us to keep in perspective our ‘cherished differences’.”

Dr Back says joint theological commissions (from the Catholic and other churches) have produced many theological documents, “but there needs to be more ‘reception’ so that people are aware of what has happened between the churches.”

At the General Audience on Wednesday, Pope Francis invited Catholics to pray for Christian unity. Addressing German-speaking pilgrims at the end, he recalled “with emotion” the prayers made in Lund, Sweden on 31 October. “In the spirit of that common commemoration of the Reform, we look to what unites us more than what divides us, continuing our journey together so as to deepen our communion and give it an ever more visible form.”