Home > Featured > In a pilgrim Church, our shrines are on the move 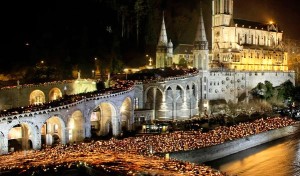 It wasn’t an April Fool’s joke when the Vatican announced on Saturday 1 April that all the world’s shrines, including Knock, Lourdes and Fatima, are being moved as a result of a papal edict.

Of course, geographically Ireland’s national Marian shrine and all of the Church’s other holy places are staying exactly where they have always been located. What is changing is that managerial responsibility for the way the Vatican oversees how these sanctuaries are managed is being moved from the Congregation for Clergy to the Pontifical Council for the Promotion of the New Evangelisation.

In a motu proprio entitled Ecclesia in Sanctuarium, published on 1 April, the Pope makes it clear that he wants shrines to be used to promote national and international gatherings aimed at fostering the renewal of pilgrimages to places of worship.

Those in the papal council involved in promoting evangelisation, under the leadership of council president Archibishop Rino Fisichella, are charged with developing formal systems for the care of existing shrines, providing training for shrine operators and producing guidelines on how shrines can be enhanced culturally and aesthetically. The pontifical council is also tasked with establishing new national and international shrines and with studying and implementing measures for promoting the role of shrines in evangelisation.

The basilica at Fatima

In the edict, Pope Francis provides an insight into the thinking behind the move: “The large influx of pilgrims, the humble and simple prayer of God’s people alternating in the liturgical celebrations, the fulfilment of so many graces that many believers certify that they have received and the natural beauty of these places allow you to see how the shrines express an irreplaceable opportunity for evangelisation in our time.”

In the edict, the Pope writes: “Despite the crisis of faith that invests the contemporary world, [shrines] are still perceived as sacred spaces to which pilgrims go to find a moment of rest, silence and contemplation in the often hectic life of today. A hidden desire creates for many a nostalgia for God and shrines can be a real refuge [for people] to rediscover themselves and regain the necessary strength for their conversion.”

Inside the basilica at Knock

This latest managerial shake-up in the Vatican continues a process initiated by Pope Benedict XVI in 2010, when he established the Pontifical Council for Promoting New Evangelisation.

In the civil service hierarchy of the Roman Curia, the tiers of government from top down are: secretariat, congregation, pontifical council, offices and institutes. While pontifical councils are lower ranking, they tend to be more specialised in the focus of their activities.