It’s important to remember Tom for how he lived 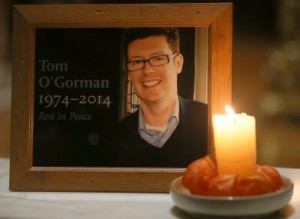 The late Tom O’Gorman was “the least violent man you could imagine” and yet he ultimately faced an appallingly violent death.

In their victim impact statement to the Central Criminal Court on Wednesday, Catherine and Paul O’Gorman, Tom’s siblings, said “It is important to us that Tom is not remembered for how he died, but for how he lived – and for the warm and beautiful person he was.”

Catherine O’Gorman continued, “He is deeply loved and painfully missed by his family and friends.”

In a report on www.independent.ie, she and her brother Paul recalled that the 39-year-old was funny.

“He was interested and excited by life. He was gentle, with an honesty that made him vulnerable. He was passionate about his faith and also deeply empathetic, intellectually curious and always open to dialogue,” they said.

Catherine O’Gorman said the one thing Paul, her brother, would miss the most were “the long phone calls they shared discussing and analysing everything from rugby and soccer to GAA.”

Of his killing by Italian Saverio Bellante, they told the court that the “greatest injustice” was the unnecessary fact of Tom’s death.

“Since the death of our brother Tom, we have felt absolute devastation,” Ms O’Gorman said in her statement.

“The last year and a half have been unimaginably painful. While we are grateful to the court for giving us the opportunity to make this statement, it is impossible to adequately articulate how this has impacted our lives.’

She explained the focus of the court has been to examine the actions and state of mind of the accused.

But, she said, for them, Tom’s brother and sister, the “most enduring experience since January 12, 2014, can only ever be the unending loss of our brother.”

She said although Tom has been primarily described during the trial as a victim of the crime committed, this is not how they remember him.

“But, to us, as his loved ones, we think only about whether he suffered, whether he was afraid, what he experienced – the least violent man you could imagine, ultimately facing such an appalling violent death himself.”

“The trial is the only thing that will conclude with any finality today – for Paul and me our loss and heartbreak will continue.”

She said they could only hope that the Irish State would do everything in its power to ensure that such a tragedy never happens again.

“At the very least with regard to taking responsibility for the future actions of the accused here today,” she concluded.

Ms Justice Margaret Heneghan said, on the basis of a consultant’s evidence, she would commit Bellante to the Central Mental Hospital.

Tom O’Gorman was a journalist with www.catholicireland.net.

We extend our deep sympathy to his family and friends. We continue to miss his sense of humour, intellectual rigour and sense of honour.