Home > News > ‘Communication is the core activity of the Church’ 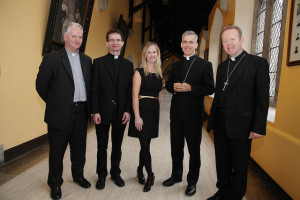 Communications is a core activity of the Church Mgr Paul Tighe, secretary of the Pontifical Council for Social Communication, said in his address in Maynooth on Thursday to mark the 40th anniversary of the founding of the Catholic Communications Office.

In his address, ‘The Church in a Digital World – Sharing the Word of God’, the Dublin priest who is based in Rome, recalled that he was in his first year in the seminary in Clonliffe College when the CCO was established.

He said he wanted to talk about some of the ideas that are important for the Church in its reflection on what it means to operate in the digital age and the importance of communications in the life of the Church.

Underlining that the Church was founded to proclaim a message, he said that bringing the Good News to the ends of the earth required the Church to be inclusive, universal and to reach out in order to avoid just talking to itself.

“At the core of our missionary activity is the call to communicate and engage in discussion, dialogue and debate with those who are outside our traditional areas of interest,” he said.

Mgr Tighe told the audience of bishops, media and communications officers that the message the Church communicates is not a message of its own making.

“We can’t decide this is what people want to hear and this is what they don’t want to hear – our core message is a given. It is not a message of words but a person. The person we proclaim is Jesus Christ who continues to be an abiding presence in our world. We are calling people not just to knowledge of but calling people into relationship with a person and a community.”

Describing it as “essential” that the Church reaches out to others, Mgr Tighe said it was also essential that the Church as a community communicate among itself. “Community relationships will only flourish when we have good communication.”

The 57-year-old said it was important to ask if people who engage with the Church feel they are welcomed.

“Do they have a sense that their opinions matter?” He said this was particularly important in a world where companies constantly inquired from their clients how their experience was and whether they were happy with their service.

“I am not saying that we have to mirror all those things but we do have to become aware that people have expectations of being recognised, people have legitimate expectations that their voice can be heard and that they can express their views. I think we are beginning to improve on that but it is something we need to be more attentive to.”

Mgr Tighe said one of the interesting things to emerge from the Synod on the Family was the consultations that were done with the lay faithful, asking for their views. “We need to have more of that if we are to give people with a sense of belonging,” he said.

“We are living in what people like to characterise as a digital era.” He said any sociologist asked to characterise what is different about this time would recognise the radical transformation taking place in communications.

According to Mgr Tighe, who formerly was communications officer for the archdiocese of Dublin, while it is relatively easy to understand what was going on from the technical side, the really difficult thing and yet the more interesting thing was to understand how access to devices like iphones are transforming social dynamics. 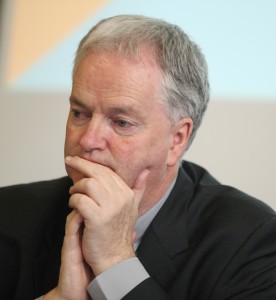 He said his own personal focus group was made up of his 15 nephews and nieces who range from age 7 to 30.

“They are one generation behind me but they are living in a totally different world. Their way of getting information and getting informed is radically different to the way that I would have got information at their age. Their way of learning is different; they have an expectation that they can express themselves – say something and that this has the possibility of reaching larger audiences. Something that would have been unthinkable for us as younger people.”

He said what was even more radical was how they form and maintain and develop friendships and that this was “changing our own patterns of communities”.

This change was ongoing and so experts don’t know where it is going to go to. “The balance of power has changed and it is so-called consumers of media who set the agenda.”

Though people in the Church like to stand outside and judge, he said it was inevitable that this is changing all of us.

“We are not outside looking in; we need to recognise how our own patterns are changing and how we think about theology and how we express our theological categories needs to change in order to take account of the culture in which people are living.”

“We have this very often in the Vatican; people don’t understand why it is important for the Church to engage with digital media. What we have tried to say is that we have to avoid this dualism that sets the real against the virtual. The reality is that the digital and the concrete are radically interpenetrative. All the time we are living in-between in an existential reality that is shaped both by the concrete experiences but increasingly by what is in digital media.”

While people are spending a huge part of their time in the digital arena, if the Church is not present in the digital it is going to be absent for very significant parts of peoples’ lives.

He underlined that the Church’s presence in the digital arena has to be affective and in sympathy with the culture of digital media.

Recalling his involvement in the launch of the @pontifex twitter handle that was created for Pope Benedict and subsequently used by Pope Francis, he said the key thing was to have a flagship project which said to people around the world that this is an important space to counter those who would prefer to abandon the digital space.

“If we abandon this space we are abandoning the people who might be spending increasing amounts of time in that space,” he suggested.

He added that it is important for people in the Church to recognise how the digital environment functions and to see it as a new continent for evangelisation.

“Often people come into our office and ask how will be use the new technology for the new evangelisation; that in many respects is the wrong question,” he said and suggested that they should be asking “how do we become present in the world created by these technologies/”

“The Church has a right and I would say an obligation to participate in the digital space.”

He recalled that when the pope’s twitter handle @pontifex was launched there was an “immediate attempt to drive the Vatican out of digital media. We had weeks of very negative comments and being blasted with negativity. A lot of people were saying we needed to get out of this as it is not fair to expose the Pope to ridicule and abuse.”

However, he said, he believes that the Church needs to present and not abandon that space.

“We need as individuals or as an institution to be good citizens in the digital space. The task is to be in social media but not of it” and to learn the capacity to show rather than to tell, rather in the way stained glass windows functioned in the past.