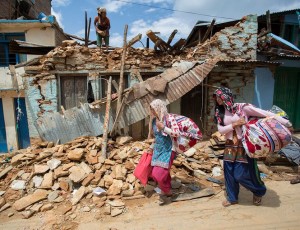 ‘Earthquakes don’t kill people, buildings do’ – badly damaged houses in a residential area of Kathmandu,
according to Conor O’Loughlin is Trócaire’s Humanitarian Coordinator in Nepal.

The International Monetary Fund (IMF) will not give Nepal debt relief under a special trust fund that helps poor countries coping with natural disasters.

However, it was denied to Nepal which was struck by a massive earthquake in April causing the deaths of more than 8,600 people and destroying over 500,000 homes.

“This is troubling news” said Eric LeCompte, a United Nations debt expert and executive director of Jubilee USA Network. “Given the devastation in Nepal, it’s hard to believe that the criteria were not met.”

He said that Nepal is one of 38 low-income countries eligible for relief from the new fund. To qualify for that relief after a natural disaster, an eligible country must meet certain criteria.

The disaster must impact at least one-third of the country’s population and either destroy 25% of the nation’s productive capacity or cause damage equal to the size of the country’s economy.

According to IMF spokesperson, Gerry Rice, Nepal met the first condition but the earthquake did not cause enough total economic damage to meet the second.

“Nepal would not qualify for support under the catastrophe containment and relief trust because under current criteria and guidelines,” he said in a briefing on Thursday (25 June).

“There are certain criteria that need to be met including that at least one-third of the population is affected, but the estimate of the GDP damage does not meet these criteria. But we are moving to support Nepal as expeditiously and as fully as we can, with our zero interest instrument.”

The decision has disappointed Jubilee USA Network. Eric LeCompte responded, “This fund was created for situations just like this and debt relief in Nepal could make a significant difference.”

The IMF, the World Bank and Asian Development Bank have loaned about $3.8 billion to Nepal.

On 25 June, Nepal hosted a conference to seek $6.6 billion to rebuild and reconstruct over the next few years.

Approximately half was offered in loans and half in grants. Some of the loan money came again from the World Bank. Funds were also offered from Nepal’s nearest neighbours India and China, and Japan, the US and Europe also offered funds.

Irish aid agency Trócaire has been working through its Caritas partners in Nepal to deliver vital aid to people affected by the devastating earthquake.