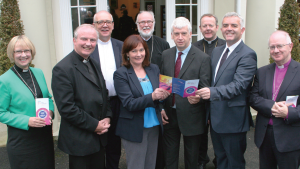 It is a duty of all Christians in Northern Ireland to face uncomfortable truths which can stop them being prisoners of the past and free themselves to be “architects of the future”, the Bishop of Derry has said.

In his address to open a two-day international conference entitled ‘Faithful Peacebuilding’, Bishop Donal McKeown said on Thursday in Templepatrick that this week’s award of the Freedom of Derry to Bishops Edward Daly and James Mehaffey was a sign that, in some places, good inter-church relations have been effective in “healing old wounds”.

In other places, the Irish Churches Peace Project (ICPP) was bringing clergy together.

“Often their previous lack of co-operation was based more on a lack of time or support than on antagonism or enmity. Pastoring your own flock can be strenuous enough. But even though we chose often challenging areas in which to do our work, the response has been very positive and encouraging.”

He added that “There is a lot of good will out the in the churches. What was missing with the know-how and the co-ordination,” he said.

However, Dr McKeown also acknowledged that religion and the Churches in Northern Ireland played “a less than helpful role” in creating and perpetuating divisions during the Troubles.

The work of the Irish Churches Peace Project (ICPP) therefore “contained an element of repentance”.

He warned that the churches could not contribute to a shared future by working in isolation but ought to be making a significant, consistent and distinctive contribution to peace building and reconciliation across the North.

Over the past few years, the ICPP, which is an initiative of Ireland’s four largest churches, the Roman Catholic, Presbyterian, Church of Ireland, Methodist and the Irish Council of Churches has developed materials to help local communities undertake dialogue and tackle difficult issues such as hurt and forgiveness.

“Our aim is expressed clearly on our website – Promoting community reconciliation through the churches working together.  We can’t do everything – but we want to do everything that we can. Thus, we have emphasised support for local parishes and congregations to meet and to build on what has already existed,” Bishop McKeown explained.

Referring to the approach of the end of this particular project, he said it will have been a success if “we are really only at the start of a much longer process of being living witness of what the Gospel can do in people’s lives”.

“We have only scratched the surface of the work that has to be done. But we hope and pray that we have done enough to convince our members that this work is both essential and possible.  Indeed, we believe that it is the duty of all Christians and not just a niche interest for some to help our society move forward,” he commented.

The conference is due to be addressed on Friday by the former hostage negotiator, Terry Waite, who spent over four years in captivity in Lebanon when Hezbollah kidnapped him in 1987 as he tried to secure the release of other hostages including John McCarthy.

Another speaker who addressed the conference on Thursday was Rev Emmanuel Murangira who spoke about his experiences as a survivor of the Rwandan genocide which saw over a million people killed in just one hundred days.

He now works with Tearfund on issues of development and reconciliation in Rwanda and Burundi.