Hundreds turn out to venerate relic of St Teresa of Avila 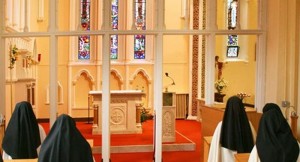 Hundreds of people from across the country are viewing the relic of the Spanish  Saint,  St Teresa of Avila as the relics complete a two week tour of Carmelite monasteries throughout Ireland. The relic, St Teresa’s walking stick is currently on a worldwide tour to commemorate the 500th anniversary of the birth of the founder of the Carmelite Order of nuns in 1515.

The relics arrived in Ireland on Saturday July 18th last and visited St Teresa’s Church in Clarendon Street in Dublin and on Sunday visited Avila Carmelite Centre on Berkley Road in Dublin.

After visiting Roebuck Carmelite monastery in Dublin yesterday (Monday) morning the relics were in Saint Joseph’s Carmelite Monastery in Kilmacud in Dublin. Speaking in advance of the visit Sr Mary Fionula told Catholicireland.net ”We are really excited about the relic’s of St Teresa of Avila coming to us here in Kilmacud. We are welcoming a relic of St Teresa – the staff she used on her journeys around Spain 500 years ago.”

The programme yesterday afternoon included a programme of Evening Prayer at 4.35 pm and a prayerful Hour with reflections from Saint Teresa’s writings between 5 and 6pm. The service, which was open to the public, concluded with a farewell ceremony at 6.45pm. 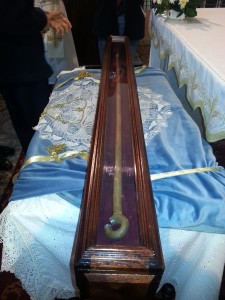 Teresa of Ávila, also called Saint Teresa of Jesus was a prominent Spanish mystic, Roman Catholic saint, Carmelite nun, author during the Counter Reformation, and theologian of contemplative life through mental prayer. She was a reformer of the Carmelite Order and is considered to be a founder of the Discalced Carmelites along with John of the Cross.

Teresa entered a Carmelite Monastery of the Incarnation in Ávila, Spain, on 2 November 1535. She found herself increasingly in disharmony with the spiritual malaise prevailing at the Incarnation monastery. Among the 150 nuns living there, the observance of cloister  designed to protect and strengthen the spirit and practice of prayer had become so lax as to lose its very purpose. The daily invasion of visitors, many of high social and political rank, vitiated the atmosphere with frivolous concerns and vain conversations. These violations of the solitude absolutely essential to progress in genuine contemplative prayer grieved Teresa to the extent that she longed to do something. 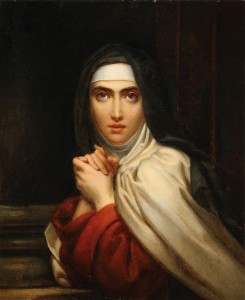 In March 1563, when Teresa moved to the new cloister, she received the papal sanction to her prime principle of absolute poverty and renunciation of property, which she proceeded to formulate into a “Constitution”. For the first five years, Teresa remained in pious seclusion, engaged in writing. In 1567, she received a patent from the Carmelite general, Rubeo de Ravenna, to establish new houses of her order, and in this effort and later visitations she made long journeys through nearly all the provinces of Spain.  After suffered much from illness during his life she died in 1582.

In 1622, forty years after her death, she was canonized by Pope Gregory XV, and on 27 September 1970 was named a Doctor of the Church by Pope Paul VI.

Her books, which include her autobiography (The Life of Teresa of Jesus) and her seminal work El Castillo Interior (trans.: The Interior Castle), are an integral part of Spanish Renaissance literature as well as Christian mysticism and Christian meditation practices. She also wrote Camino de Perfección (The Way of Perfection).