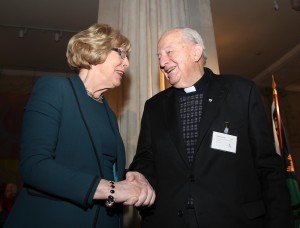 Pic shows Sabina Higgins greeting Fr Michael Sinnott of the Missionaries of St Columban who was kidnapped and released in the Philippines in 2009. Pic John Mc Elroy.

It is “very appropriate” that the life’s work of missionaries, who have given over 40 years in selfless work in many different countries, often in extremely difficult and challenging circumstances, should be publicly acknowledged, Sabina Higgins said on Wednesday.

Addressing 220 returned missionaries at Dublin’s City Hall, Mrs Higgins commended their work around the world in the fields of education, medicine and development work as something of which Ireland can be “truly proud”.

In her keynote address, Sabina Higgins told the assembled group, many of whom were in their 70s and 80s and even some who were in their 90s, that Irish missionaries were “known in particular for the respect that they displayed towards the people they lived among and their culture.”

Besides catering for spiritual needs, she said at the heart of their work was a desire for social justice and to improve the lives of the poor and marginalised, and demand their legal, social and political rights.

“We are pleased that we used to be called the Island of Saints and Scholars. For over a thousand years Ireland has produced extraordinary individuals who have travelled the world as missionaries, seeking to improve the lives of people through attending to their spiritual social education and health needs.”

She noted that 2015 would see Ireland celebrate the 1400th anniversary of St Columbanus’ “great mission through Europe.”

During the ceremony, each of the returned missionaries was presented with a special medal to mark their milestone, while Fr Michael Corcoran, President of the Irish Missionary Union, described them as “gentle irritants” who challenged those who exploited the weak. 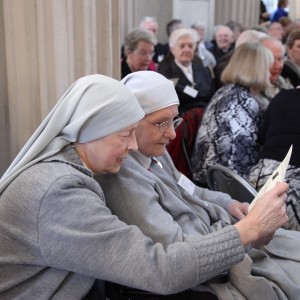 Pic shows Srs Lucyna and Mary Patrick Kenny of the Missionary Sisters of St Peter Claver looking at a programme before the event got underway. Pic John Mc Elroy.

Recalling life in Co Galway when she was growing up, she said missions and missionaries were always an important part of her household, as was typical of many households in Ireland.

Mrs Higgins’ father had 11 sisters, three of whom became nuns, while nine of her first cousins became priests and nuns.

She paid tribute to her brother, Fr Paddy Coyne, who served as a Holy Ghost priest in Kenya, while her sister, Margaret, joined the Daughters of Charity of St Vincent de Paul and set up eye and polio clinics in Ethiopia.

“Having a religious vocation and going abroad was something that linked one generation to another in many families,” she told the assembled guests in City Hall.

Elsewhere, she acknowledged that Irish Missionaries “great and well-earned reputation overseas” was due to the “respect that they displayed both towards the people they lived amongst and their culture.”

Irish people, perhaps, have a special understanding, having shared the experience of being colonised, and carry a memory of famine, marginalisation and oppression. “They can easily identify with the needs of the often marginalised or neglected groups they live among,” she said.

Mrs Higgins concluded her address by saying that the men and women “who we are here to honour and acknowledge, have each dedicated a lifetime to serve the communities they joined.”

“They shared intimately in the lives of the people they served, their immersion was total. It is important that we express our appreciation and gratitude to them for their selfless endeavour and achievement both in their contribution abroad and at home, and for the great example they have provided, and for the vision they have shared.”

One of the oldest missionaries present for the ceremony was 92-year-old Sr Margarita Burke who spent 53 years teaching Maths and English in Kenya. “I loved every moment of it. I did get malaria and all the usual things – but I survived,” she told the CatholicIreland.net

“I was sent back by the doctor because my eyes are gone – I have got macular degeneration,” she explained. The Dublin-born nun described missionary life as “challenging” and said it required perseverance but was worth it. Now living at a convent in Dalkey, she described the Kenyans as “a wonderful people. I miss them – but this is home.” 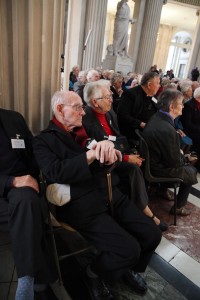 One of the most recently returned missionaries was 75-year-old Fr Pat McGeever, CSSp who came back to Ireland two weeks’ ago.

Now part of the Spiritan community attached to Rockwell College in his native Tipperary, he went overseas in 1968. Over his 45 years abroad he served in Sierra Leone, a country which is preparing to celebrate 150 years of Spiritan presence shortly, as well as Papua New Guinea and then Australia with the aboriginal people.

He told CatholicIreland.net that his ministry was pastoral. “Most of my work was getting them to appreciate their own culture, adapting it to the liturgy and then development work such as building roads and getting water to villages,” he explained.

Asked if he was shell shocked by the Ireland he has just returned to, he responded, “Not really. I love my Ireland and I always kept in touch. The weather is wonderful from my point of view – I feel very much alive. I love the multiculturalism because I am used to that. I can see a lot of selfishness in the modern Ireland but there is still the genuineness there and I love it.”