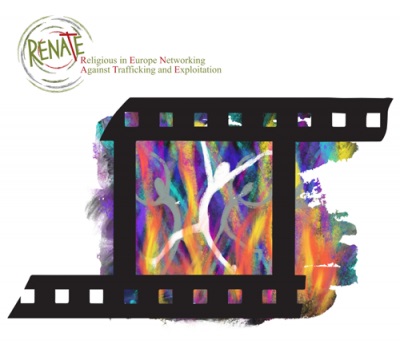 For the first time ever, BAFTA (the British Academy of Film and Television Arts) is to host a festival of films about human trafficking and the moves to combat it.

A film competition for 18- to 20-year-olds will also be part of the event to mark European Anti-Trafficking Day to be held on 18 October 2020.

RENATE (Religious in Europe Networking Against Trafficking and Exploitation) is organising the festival about trafficking and the competition, which is open to young people in every European country including Ireland.

It is “a festival of films about trafficking and the moves to combat what Pope Francis has described as a ‘crime against humanity’,” stated RENATE, which is inviting people to submit short four-minute films under the slogan ‘Slavery – Human Trafficking – Near YOU!’. Entrants can also use hashtags such as: #StopTheDemand, #BreakTheChains and #EndTheCycleTOGETHER.

Entries can be made by an individual or a team. Up to five team members can attend the festival, and will also receive a certificate. Competition winners will receive £2,000 for first place, £1,000 for second place and £500 for third place.

The deadline for entries has been pushed back to 30 September 2020 due to COVID-19. There is also extra information for filmmakers about working on their videos during COVID-19, for example on how to work remotely.

The pandemic has made the issue of trafficking more urgent than ever according to RENATE, which stated: “COVID-19 potentially has significant negative implications on trafficking, and so we encourage you to make a video for our competition and help raise awareness around trafficking.”

Separately this week, the issue of trafficking has been to the fore with the World Day Against Trafficking in Persons. In Ireland, Justice Minister Helen McEntee stated that Gardaí are currently investigating about 80 cases of human trafficking. However, she added that no one has yet been convicted of human trafficking in Ireland. People have been jailed for other similar crimes though.

The Minister stated that human trafficking is a problem in Ireland: just last week, three people in Cork were identified as having been trafficked into Ireland by an Eastern European gang, which it is alleged has been supplying people to work in farms and factories. The trafficked men are now getting the help they need.

The Minister said there is a National Action Plan to Prevent and Combat Human Trafficking and the Gardaí have a Human Trafficking Investigation and Coordination Unit to combat this crime. She acknowledged that Ireland has been downgraded in the US Trafficking in Persons Report 2020 because of inadequacies in identifying victims and helping them (see Cinews 13 July, 2020).

Minister McEntee said the Government’s forum for groups involved in combating human trafficking met recently for the first time. Work is also being done to designate the Irish Human Rights and Equality Commission (IHREC) as Ireland’s National Rapporteur on human trafficking under article 19 of the EU Human Trafficking Directive, and legislation is being prepared to achieve this.

Kevin Hyland, a former Independent Anti-Slavery Commissioner in the UK, who represents Ireland on the Council of Europe’s Independent Group of Experts on Action against Trafficking in Human Beings (GRETA), said on RTÉ’s ‘Morning Ireland’ radio programme that there were 34 cases for sex trafficking, six for labour, and three for forced criminality in Ireland last year. Nine of those cases involved children. He said he suspects that many more cases were not detected.

For more information about the film competition, click here.