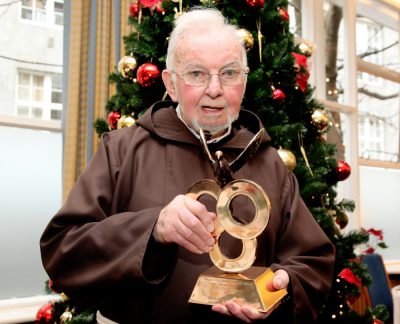 The much-loved Capuchin friar who has been looking after Dublin’s homeless for almost 50 years is the latest recipient of the Oireachtas Human Dignity Award.

Ceann Comhairle Seán Ó Fearghail TD made the presentation, now in its fourth year, to Br Kevin Crowley at Leinster House on Thursday.

“Pope Francis’s visit to the Capuchin Day Centre while in Ireland last August was a fitting recognition of their love and care over so many years,” said Mr Ó Fearghail.

“A look at the history of the centre shows that in each decade since 1969, the Capuchins, led by Br Kevin, responded to the emerging problems in Irish society, whether it was caring for people discharged from residential care without social supports in the 1970s or looking after the ‘new poor’ who were stranded with unpayable debts after the collapse of the banks in 2008.

“In making this award, we are paying tribute to 50 years of heroism, but in fact the Capuchins’ care for the poor of Dublin goes back over 400 years,” Mr Ó Fearghail said.

Senator Rónán Mullen, who had proposed Br Kevin for the award, said that the Capuchins had fully earned the deep respect and appreciation of Irish people.

“At a time when people seem divided as never before about many things, Br Kevin and his team, with their love and dedication, represent our best traditions and our best hope for the future,” he said.

The Capuchin Day Centre, founded by Br Kevin in 1969, provides hot meals, food parcels, clothing and day care facilities for people who are homeless and in need. From Monday to Saturday inclusive it provides a morning and afternoon meals service, distributes new and second-hand clothing, showers and personal care facilities and products.

In addition, the Centre’s services also include a GP/nurse clinic, a dental clinic, a chiropody clinic, an optician clinic, a counselling service, and advocacy and social support. Weekly grocery parcels are also distributed in Dublin and Kilkenny.

A registered charity, the centre cost €4m to run in 2017, with just over 10 per cent of this coming from the state, the rest from the Church and donations. In 2017, the centre provided approximately 400,000 units of service – an average of 1,000 clients a day.

Accepting the award, Br Kevin said the Capuchins were committed to meeting the needs of their “homeless and needy friends” for as long as is necessary.

“But it is our hope and prayer that one day there will be no need for our service because everyone will have the social and financial resources to live life to the full as God intended.”

Previous recipients of the Human Life, Human Rights and Human Dignity Award were Barney Curley, founder of Direct Aid For Africa; Magnus MacFarlane-Barrow, founder of Mary’s Meals; and Gina Heraty of Our Little Brothers and Sisters Orphanage in Haiti.

The award is given annually to a person or group whose commitment to the promotion of human dignity has been exemplary.