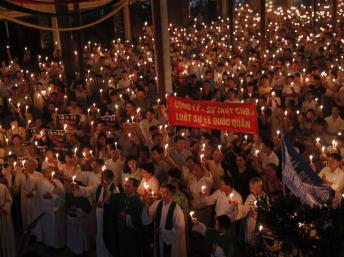 Members of Vietnam’s Redemptorist communities organised a candlelight vigil in Hanoi to protest at the continued detention of Catholic lawyer, Le Quoc Quan.

The lawyer’s appeal process has just begun amid concerns over his state of health, which has been weakened by his two-week hunger strike.

At least three thousand Christians and non Christians took part in the vigil where prayers were said for the health of Le Quoc Quan as well as for many other dissidents, journalists and activists jailed for their stance on human rights and religious freedom.

Le Quoc Quan was convicted on (false) charges of tax fraud; he has been on hunger strike since 2 February to protest at the prison authority’s refusal to provide him with legal and religious texts, including the Bible.

His family and lawyers have described his state of his health as “worrying”.

Catholic sources report that he is very “weak” from lack of food and the seasonally cold and wet climate in Hanoi.

In addition, the prison authorities repeatedly prevented him meeting his lawyers ahead of his appearance before the Court of Appeal.

His case, along with that of hundreds of other dissidents and activists, has galvanised popular discontent towards the Communist leadership and the regime in Vietnam.

Periodically arrested and released after short periods in the past, Le Quoc Quan was detained again by Vietnamese government officials on 27 December 2012, on false trumped-up charges of “tax evasion”.

The accusations and the process of his detention have been strongly condemned by many human rights associations around the world.

International organisations, groups of Catholic activists and representatives of the main religions in Vietnam have come to the defence of the dissident, who had fasted and prayed ahead of the trial.

Separately, the story of a Hmong Christian leader who was refused urgent hospital treatment in Hanoi has also emerged.

His relatives tried to have him admitted to various hospitals, but none wanted to hospitalise him.

Originally from the northern province of Tuyen Quang, he was a guest of the Redemptorists in Hanoi.

It appears that a long-standing dispute between the Vietnamese authorities and the Hmong Christian minority over arrangements for burial of the dead is behind the refusal to treat him.

In the past, the Hmong leader spent five years in prison (1990-1995) and has been repeatedly arrested and detained for questioning.

During a previous admission to a military hospital, the police forced him to pay for medical expenses for his treatment.

The Vietnamese government has been pursuing a harsh campaign against dissidents, bloggers, religious leaders (including Buddhists), Catholic activists and entire communities.

A clear example of this was seen last year in the diocese of Vinh, where national media and the government promoted a smear campaign and targeted attacks against the bishop and faithful.

The repression also affects individuals guilty of claiming the right to religious freedom and respect for citizens’ civil rights and ethnic minorities such as the Hmong are targeted by Hanoi authorities because they are accused of collaborating with the United States during the war.