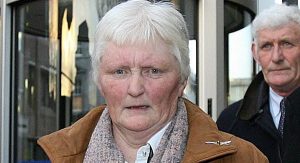 Former nun Nora Wall, who was wrongly convicted of rape in June 1999, has been awarded massive damages following the settlement of her case against the State and the Minister for Justice.

The former Mercy Sister who was known as Sr Dominic became the first woman to be convicted of rape in Ireland seventeen years ago.

Ms Wall was released on bail four days into a life sentence after it emerged that a prosecution witness had been called, against the direction of the DPP, to testify at her trial.

That witness later admitted fabricating evidence in which she claimed to have seen Nora Wall holding down the alleged victim during the attack.

In light of this, the Court of Criminal Appeal in 2005 declared Ms Wall’s conviction a miscarriage of justice.

The case for damages was begun in 2010. The terms of the settlement have remained confidential but it is believed the former nun settled for more than €500,000.

Her co-accused Pablo McCabe was a homeless schizophrenic.

In relation to one of the two rape allegations, the defence showed that McCabe could not possibly have been there on the date in question.

The jury acquitted McCabe on that count, and convicted him and Wall on the second rape charge.

On 1 December 2005, the Court of Criminal Appeal in Ireland certified that Wall had been the victim of a miscarriage of justice. Pablo McCabe died in December 2002.

The events took place following the airing of the RTE documentary, States of Fear.

A 2005 editorial in The Irish Times suggested that the programme influenced jury members and may have played a role in the miscarriage of justice against Nora Wall.