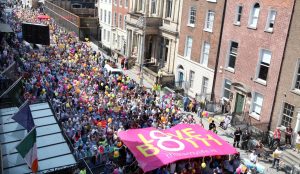 In a ringing affirmation of the Eighth Amendment, thousands of people thronged Molesworth Street yesterday to ‘Celebrate the Eighth’.

Full sunshine bolstered a party atmosphere as the stories relating to abortion not often heard in the Irish media, rang out.

Mary Kenny from Limerick told the gathering that in 2013 she was faced with “an extremely unplanned pregnancy”.

A nineteen year old feminist in her second year at college, at the time she was already planning her study abroad.

“You can only imagine my panic. I genuinely thought it was the end of my life and the end of the world for me.  I’m sorry to say that the first thought to cross my mind was abortion.”

“Thankfully” she spoke to friends who talked her out of it “but I often wonder what the outcome would have been, if I only had to sit in my car and drive myself twenty minutes down the road into the Maternity Hospital in Limerick to end the life of my own little baby,” she asked.

“You don’t have to be a scholar or an academic to know that when people are faced with situations that overwhelm them, like an unplanned pregnancy, they act irrationally. Women are being betrayed every day by the abortion lobby when they say there are no consequences to abortion and when they say their babies are not really babies but a ‘clump of cells’.” 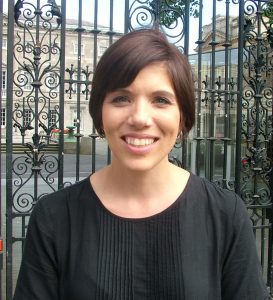 Abortion is taking all choices away from these tiny humans who rely on their mother for everything, she said.

The answer to an unplanned pregnancy is “support, guidance and friendship” she Mary Kenny’s whose daughter Holly is now two years old.

Keynote speaker, Melissa Ohden from the US, told how in 1977 she was born alive after a failed abortion and left for dead.

Her life was saved when a nurse on duty heard her cry in the place where she was discarded and intervened to save her.

In her address Ms Ohden told the story of how she was aborted and congratulated Ireland for affording legal protection to the unborn child in the Constitution.

“You have every reason to be proud of the 8th Amendment. Passing this provision in 1983 was a hugely positive step forward for authentic human rights. As an abortion survivor, I applaud your country for it.”

She was critical of Amnesty Ireland’s campaign in favour of abortion.

“I think it is an awful tragedy that groups like Amnesty Ireland openly campaign for abortion and never speak up, in cases similar to mine, where babies born alive after botched abortions are abandoned as they gasp for breath and struggle helplessly to stay alive.”

“Amnesty was once a genuine defender of human rights,” she continued. “But given that it now describes abortion as a ‘human right,’ the fact that I am alive today is a human rights violation in its eyes.”

“I was never more in need of human rights protection than when I was being slowly burned to death in a saline infusion abortion and then left to die. All human beings have human rights, despite what Amnesty thinks.” 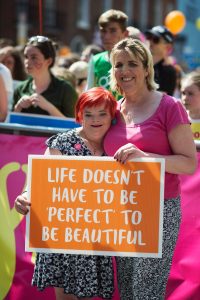 Sinead McBreen from Cavan, flanked by her husband and three children, described the pressure she came under to abort her daughter Grace. She said she was given a misdiagnosis and told by doctors that Grace had a life-limiting condition with no chance of surviving to birth.

She then introduced her daughter to the crowd, who waved in excitement at all the attention making everyone smile.

Without it “the pressure on parents to abort their children in similar situations would intensify greatly.”

Heidi Crowther who has Down Syndrome and is involved in the ‘Don’t screen us out’ campaign in the UK, told the rally that every life matters.

“Every life has meaning as I do,” she said. Ms Crowther, aged twenty, lives on her own in a flat and works with kids “and I’m loving it”.

“I have a passionate love for Jesus. I believe that all life is precious. We are all equal and we all deserve to live.”