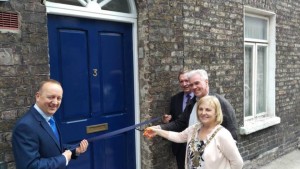 Mortgage arrears and negative equity remain a serious concern, with a total of 110,366 mortgages in arrears at the end of 2014 according to the first ever National Statement of Housing Supply and Demand 2014 and Outlook for 2015-17.

The statement also finds that Ireland will need almost 21,000 houses per year for the next three years to keep up with demand.

Rents have increased, particularly for apartments, and nationally rents are 6.9% higher in the first quarter (Q1) of 2015 compared with Q1 of 2014. Rent was 9.6% higher in Dublin and 5.3% higher outside Dublin.

“It provides a much-needed analysis of the true picture of housing supply and demand in Ireland along with future projections, allowing for emerging imbalances to be identified and rectified at an early stage,” said Mr Paudie Coffey, Minister for State with responsibility for housing.

Speaking at the launch of the report on Tuesday 29 July, the Minister added: “This data will help ensure policy responses are evidence-based and needs-led, as we endeavour to build sustainable communities for the present and future generations.”

Speaking at the event, Dr Conor Skehan, Chairman of the Housing Agency, said that housing needs can be met by addressing issues such as housing supply, housing land availability, and provision of social housing.

“Keeping those initiatives on target requires accurate data and progress reports on extent to which these needs are being met. This is the first of a series of annual reports to deliver a state of the nation picture of what housing needs are and how we are addressing housing supply,” he said.

The report states that nationally, there was an undersupply of the required housing in 2014 (73% of the requirement was provided), allowing for pent up demand from 2012 and 2013.

New household formation is projected to increase for each of the next three years and more residential units are required to meet that need.

The report also states that almost 21,000 additional residential units will be required each year over the next three years to meet demand.

“Homelessness in Ireland now is beyond crisis. We have to look at every possible solution. Many of the emergencies hostels in Dublin are not fit for purpose, they have dormitories that are full of people using drugs and young people have to go into those,” he warned.

The former local authority voids were renovated with funding from Saint-Gobain Ireland as well as the charity’s own resources.

Sr Stan also urged the Government last week to honour the recommendation by the constitutional convention to include the right to a home in the Constitution.

“I believe that should be put before the people in a referendum, and I have little doubt that the result will be one based on humanity and generosity,” she wrote in an article in the Irish Times last Friday.

She stated that in the run-up to Easter 2016, there will be discussions about where we stand as a nation and our values.

“We should acknowledge that we have allowed our people’s most basic requirement – a place to call home, a place where they can live their lives and bring up their children in security, privacy and safety – to become a “debased currency”.

“Market forces and speculation were placed first and foremost ahead of the needs of families,” she wrote. “It is time now to readjust our priorities. By making and honouring commitments and by delivering constitutional change we can ensure that in our communities people can be assured of a place to call home.”

She said that housing policy should address three key areas: honour the commitment to introduce rent certainty, speed up the delivery of social housing and enshrine the provision of a home as a basic right in our Constitution.