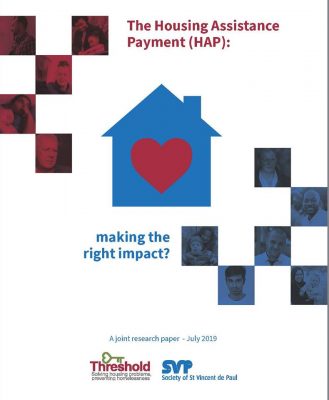 The difference between Housing Assistance Payment (HAP) available to vulnerable families and the cost of rent in the private rental sector is increasing so much that some are at risk of homelessness.

A new survey has shown that almost half (45 per cent) of those paying a top-up, or extra money on top of HAP for rent, said that they were struggling with paying utility bills, buying groceries and covering childcare and school costs as a result.

“This was a feature of the [old] rent supplement payments system which HAP was designed to prevent,” said John-Mark McCafferty, CEO, Threshold. Rent supplement was mostly replaced with HAP as of 2017.

Speaking about the new survey from two charities –Threshold and the Society of St Vincent de Paul (SVP) – Mark McCafferty said that the amounts involved in unsanctioned and unaffordable top-ups are increasing.

The report concluded that while HAP is intended to help families pay for a place to live, the reality is that HAP is so low that many cannot afford private rental accommodation. 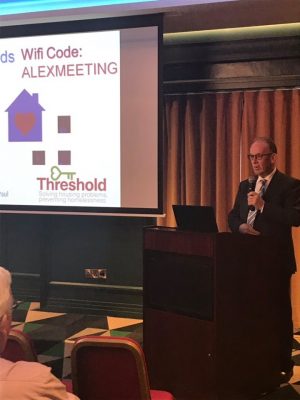 The survey also highlighted the lack of regulation to ensure a proper standard of accommodation for HAP tenants.

“Our volunteers who visit families in private rented accommodation who are in receipt of HAP find that many tenants are living in substandard and possibly unsafe accommodation and are unable to persuade their landlord to improve the standard of their living conditions,” said Nessan Vaughan, chairperson of the SVP National Social Justice Committee.

The survey report contains many examples of the difficulties HAP tenants face, including the discrimination experienced by some vulnerable households trying to access housing in the Private Rental Sector (PRS), who must compete with other prospective tenants who may be seen as more desirable by landlords.

It also found that HAP operates within the private rented sector, which does not provide long-term security of tenure. Threshold and the SVP are calling for a complete review of HAP and its interaction with the PRS to determine the next steps for HAP given the changing landscape of housing and renting in Ireland.

The charities called for greater provision of social housing by the local authorities. There is also an urgent need for “real” affordable rental properties, whereby the rent reflects ability to pay as opposed to being indexed to market rents.

Since its introduction in 2014, HAP had grown from 500 tenancies to almost 48,000 at the end of 2018. As part of its Rebuilding Ireland strategy, the government aims to bring that figure up to 83,760 HAP tenancies by 2021. The government plans to build 33,437 homes in the same time period – homes offering the security and affordability that people need.

This time last week (2 July 2019), the Minister for Housing, Planning and Local Government, Mr Eoghan Murphy, announced the designation of 19 new Rent Pressure Zones (RPZs) across 11 counties. At the announcement the Minister said that the new designations mean that roughly 65 per cent of renters are now covered by rent controls, which mean that increases in rents in these areas have a 4 per cent annual cap.

The Minister stated: “Rents are still too high and in some parts of the country are still rising unsustainably. This was anticipated and that’s why we moved.” He said the new designations and improved enforcement of existing rent pressure zones should help tackle rising rents, but it will take time to see the effects, as they have only recently become law. He ruled out rent freezes, as he said that they would also freeze supply of new rental properties.