Houses rise from Philippines debris thanks to Irish aid 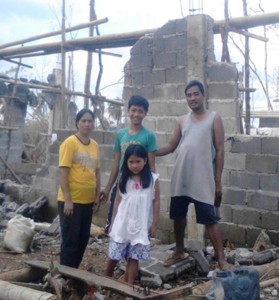 The homes of thirty-one families are being rebuilt in Tacloban and Panay Island thanks to aid from, among others, the Déise Philippines Appeal in Dungarvan.

In December 2013 and January 2014, the Déise appeal in Waterford collected two forty food trailer loads of materials destined for the typhoon stricken communities at Tacloban and Palo on Leyte Island and Bantayan Island and Kalibo on Panay Island in the Philippines.

In addition to collecting material goods, the appeal raised €2,000 in cash which they sent to the Typhoon Haiyan rehabilitation Project, sponsored by Focolare in the Philippines.

Super typhoon Haiyan, one of the strongest tropical cyclones ever recorded, devastated portions of Southeast Asia, particularly the Philippines, on 8 November 2013.

Now seven months on, construction is in full swing.

In Tacloban, six houses have been completed and documentation has been filed for the construction if another five houses.

The Typhoon Haiyan Rehabilitation Project is also purchasing new land for some families because where they currently live is constantly being flooded. 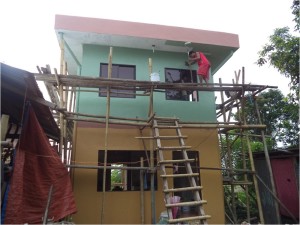 “In Panay Island, in addition to the five houses already completed, seven more are under construction, while we are processing the purchase of land for twenty row houses for families who do not have their own land.”

“At the moment, in total, we are helping twelve families there,” Allesandra Emide writes to CatholicIreland.net.

To date, they have helped thirty-one families, rebuilding their houses with “solid materials – roof with concrete gutter, foundations and walls of solid masonry, one or two storey depending on the needs, each measuring around 50 square metres.”

But with a large volume of requests for help, the rehabilitation project is now aiming to help sixty families.

Minx Lumio, a survivor of Typhoon Haiyan had her home badly damaged by the typhoon, but in its aftermath concentrated on helping her neighbours who were worse off than herself.

“Let’s not lose our love and faith in Jesus,” she told a distraught neighbour’s child, “Let’s just pray and continue to love Him in others… Jesus will help us”. 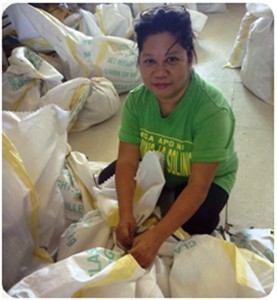 She received aid and money from friends and relatives, but gave almost all of it away.

“Mama, you preferred to help others when we don’t have anything yet to repair our house?” one of her children told her.

She repeated that they had to believe in Jesus’ love for them.

“And it was true because after some months, we were just overjoyed that our house was included for repair of the housing project of Typhoon Haiyan victims,” writes Minx.

Audrey Hallahan, who began the Déise Philippines Appeal in Dungarvan, said she cried when she read the update from Allesandra Emide about how the aid was being used in Tacloban and Panay Island.

“Everyone benefitted from this appeal in so many ways both the receivers and the givers,” she told CatholicIreland.net

“I hope it will continue. There is always someone in need.”

She added that it was the unity between the Irish community and those in the Philippines that had made everything possible.