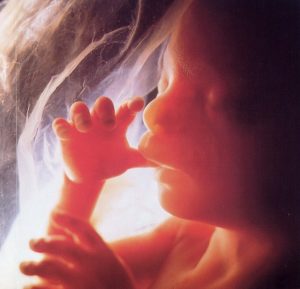 The hand that a baby sucks while in the womb is a strong indication of whether he or she will be lefthanded or righthanded in later life. (Photo SPUC.)

According to the Pro Life Campaign, it has been a disappointing week for Northern Ireland from the pro-life perspective: the Westminster House of Commons voted for the final time to impose extreme abortion laws there.

MPs voted 253 to 136 in favour of the motion approving the abortion regime. The Commons vote followed a few days after a similar vote in the House of Lords where the ratio was 355 to 77.

According to the Pro-Life Campaign, these votes represent a shocking lack of respect for due process, Northern Ireland political representatives (who voted to reject the extreme elements of the proposals earlier this month), the people of Northern Ireland (who rejected any change to the law by 79 per cent in a public consultation), and most fundamentally for the lives of unborn children who will be deprived of their right to life.

While this result is disappointing, the fact that well over 200 public representatives in the House of Commons and House of Lords voted against the regulations is encouraging for the pro-life movement. It shows that lobbying efforts from pro-life supporters and organisations works, and that the challenge now is to consolidate that support to look for change.

The Pro Life Campaign encourages its colleagues in Northern Ireland to keep up the fight. They will to continue to work with them to support women in unplanned pregnancies and ultimately to overturn what they believe are unjust and extreme abortion laws across the island of Ireland.