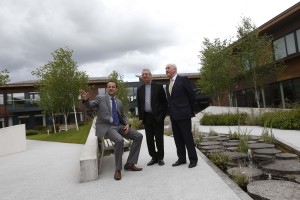 Archbishop Diarmuid Martin of Dublin presided over the blessing of the new €24.5 million hospice in Blanchardstown on Saturday.

St Francis Hospice was formally opened by the Minister for Health, Leo Varadkar, who paid tribute to the work of fundraisers and the support of the local community for making it possible.

Construction of the €24.5m facility began in 2009 but it was only last year that the provision of revenue funding by the HSE to open the in-patient unit went ahead.

Beds were subsequently opened on a phased basis between last September and February of this year.

The HSE provided €1.5m towards the fit out costs of the hospice but the balance of the €24.5m cost was raised through fundraising and a bank loan.

“The Dublin 15 Fundraising Group led by Fr Dan Joe O’Mahony and Fr Eugene Kennedy made a massive contribution of €7 million. I want to congratulate them for their fantastic effort, along with the chairman, Justice Peter Kelly, and the directors of St Francis Hospice Dublin,” Minister Varadkar said.

Describing St Francis’ as “a superb facility providing specialist palliative care services” he said it would “make a real difference to patients and their families”.

Minister Varadkar also recalled the critical contribution to the securing of the hospice made by the late Minister for Finance, Brian Lenihan, who represented the constituency in which it is located up until his death in 2011.

“There’s one person who can’t be with us but we should remember him. Brian Lenihan secured the land. He is here in spirit, I am sure,” he said.

The 24-bed facility will provide a full range of specialist palliative care services in the West Dublin area.

As well as providing 24 in-patient beds, the new facility also acts as a base for the community palliative care team, an education centre and a hospice day care centre that currently opens two days per week. It is hoped to extend this to four days as funding becomes available.

Mr Justice Peter Kelly, Chairman of St Francis Hospice, said the opening of the Blanchardstown facility was “critical to expanding the range of specialist palliative care services we can provide to the community”.

“The 24 new in-patient beds at Blanchardstown, in addition to the 19 beds we have available at our Raheny hospice, will greatly help reduce waiting lists for in-patient services. I thank all who helped to make this possible,” he said.