Home > News > Hopes for breakthrough in Stations of the Cross robbery

Hopes for breakthrough in Stations of the Cross robbery 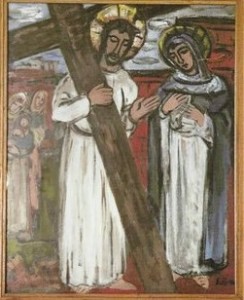 Hopes for a possible breakthrough in the investigation into the theft of six prized works of art from a Co Galway church have been raised by the sighting of a couple at the church on the day of the robbery.

Six of a set of fourteen stations of the cross painted by the renowned Irish religious artist, Evie Hone, were stolen from the Church of St Peter and Paul at Kiltullagh near Athenry between 10am and 9.15pm on 22 June.

The keys to a backdoor of the Church had been stolen one week prior to the robbery of the artwork.

According to the Irish Independent newspaper, a man and woman could hold vital clues to the theft.

Meanwhile, the Gardaí have alerted auction houses in Ireland and Interpol has also been notified in an effort to prevent the six works being sold off abroad.

According to information given to the Gardaí, a man, described as heavy set, and a woman were seen in a small, older silver car [described as possibly a Nissan Micra] near the front of the church on the day of the theft. They were thought to be aged in their late 30s.

The woman was wearing a long, flowing skirt. They were reportedly parked close to the car park near the Kiltullagh community centre opposite the church.

Detective Inspector Michael Coppinger told the Irish Independent that inquiries in the area had turned up only one suspicious sighting.

“These paintings are of tremendous value to the church and the local people. They represent part of a collection but they are also part of the fabric of the whole parish,” Detective Coppinger said.

Separately, Crimestoppers has offered a substantial reward for information in relation to the theft.

According to local parish priest, Fr Martin McNamara, the stolen works of religious art were removed from the church sometime before he locked up on Saturday night 22 June.

The 14 works were commissioned from Hone, a Dublin-bon religious artist, in 1945-46 by a private benefactor for the small rural Co Galway church.

The six missing stations hung on either side of the aisles.

Last year, preliminary sketches which Hone did for the Kiltullagh stations sold at auction for more than €40,000. This may have highlighted the value of the Kiltullagh paintings.

Though Evie Hone is best known as a stained-glass artist, this series was one of her most high profile painting projects.

Works of hers include the east window at Eton College’s chapel and ‘My Four Green Fields’ in Government Buildings in Dublin as well as a series of five stained glass windows on the life of Christ at the Jesuit Manresa Retreat Centre in Dublin.

The Kiltullagh Stations of the Cross was the artist’s first commission for a complete set of stations. The remaining paintings in Galway have been removed for safekeeping.