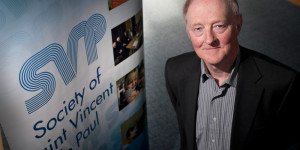 The fallout from six years of austerity and continued cuts is now becoming clear, Geoff Meagher, National President of the Society of St Vincent de Paul has warned.

In their pre-budget submission, the SVP said it wanted Budget 2015 to deliver on three key priorities so that Government can plan for the right kind of recovery: a recovery which does not leave people behind.

In the Introduction to the submission, the SVP National President said that decision-making must be embedded in a strong evidence base and rooted in values which acknowledge the importance of social and human capital as well as economic concerns.

According to the SVP, Budget 2015 must: tackle poverty and social exclusion; tackle unemployment and provide supports and opportunities to jobless households; and invest in our children and young people.

The SVP said it is seeing first hand the impact that the crisis and the austerity programme which followed the crisis is having on struggling households across Ireland.

Calls for assistance to the SVP’s largest regional offices have increased by over 100% since 2009.

The impact of cutbacks to incomes and services has been most keenly felt by those least able to afford it, resulting in increased demand for our services.

The SVP is spending almost €80 million per annum helping individuals and families in need.

Waiting lists are increasing for critical health services. Thousands of children with disabilities are waiting years for assessments and supports.

A housing crisis has emerged, with homeless families being accommodated in hotels due to a shortage of suitable accommodation, with the risk of homelessness increasing for many households due to higher rents.

“We now have almost 90,000 households on the social housing waiting lists and homelessness is increasing. At present over 390,000 people are on the Live Register seeking employment. More starkly one in four children is now growing up in a home where no one has a job,” Geoff Meagher said.

“At a very basic level and with water charges on the way, SVP sees families struggling with their current household bills, especially with their energy costs.”

The SVP National President warned that Ireland has one of the highest rates of third level qualifications among young people in the EU and yet 30% of children from disadvantaged areas leave primary school with low levels of literacy and numeracy, half a million adults have literacy problems, 25% have weak numeracy skills and almost 17% of our young people are not in employment, education or training.

“At a time of continued retrenchment in health spending, 10% of our population experience food poverty and we have very stark income-related health inequalities,” the SVP president said.

“We need Government leadership and policies that focus on people as much as fiscal and economic issues. Our priority should be to ensure that when recovery comes, those who are struggling, disadvantaged, poor and excluded are not left behind.”

“Many of the safety nets designed to protect people who are vulnerable have been undermined, rationed or simply removed in recent years.”

“Unless we tackle the problems described above and ensure that the necessary social safety nets are put in place for a more inclusive society; we risk leaving a generation of children behind; we risk creating a future population of older people who live in poverty; we risk being unable to weather future crises; and we risk missing the opportunity to develop Ireland into a fairer, more equal society.”

The pre-budget submission from the SVP makes 33 proposals for the 2015 budget. These include:

* Ensuring household energy is affordable: energy policy for low-income household must balance income, prices, energy-efficiency and awareness.
* Investing in early childhood care and education
* Healthy eating in schools – increase funding or the School Meals Scheme
* A reduction in various school costs
* Intervention needed in child and adolescent mental health services
* Helping disadvantaged young people into further education and training
* Reverse the cut to young people’s jobseekers’ payments and Supplementary Welfare Allowance
* Remove the prescription charge or medical card holders
* Retain the monthly Drug Payment Scheme threshold
* Resource and roll out a new National House Condition Survey by the end of 2015
* Increase the rate of Back to Education Allowance for young people aged under 26 to €188 per week
* Protect and enhance the Family Income Supplement
* Reverse the reductions in the earnings disregard for the One Parent Family Payment
* Ensure all landlords receiving the rent supplement give permission for installation of pay-as-you-go electricity and gas meters
* Restore Child Benefit to children in full-time second-level education who are living in low-income households and aged over 18