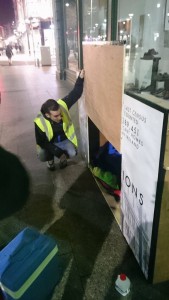 Four ‘pods’ or homeless shelters appeared in Dublin during the early hours of Monday morning.

The simple temporary wooden boxes are the brainchild of a group called #gimmeshelterIreland who say that sleeping in a cold plywood box is only slightly better than sleeping on the street.

However, their shame and frustration at the State’s lack of effort to properly address the current housing emergency spurred them on.

“We call on all our elected representatives to ensure basic human dignity is afforded to all people in Ireland. This means that every person has the right to live somewhere in security, peace and dignity,” they said and added that they have no affiliation with any political party or candidate.

The structures were placed in four city centre locations, the most significant being on Molesworth Street, near the doorway where homeless man Jonathan Corrie died more than a year ago.

There is also one near the Central Bank on Dame Street, and in front of Busaras, on O’Connell Street. 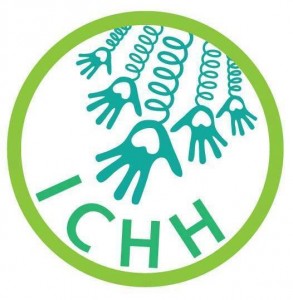 Inner City Helping Homeless (ICHH) came across the ‘pods’ on their nightly visits around the city.

They spoke to someone inside a ‘pod’ and he told them, “Its giving me shelter and will keep the rain off me, but people (are) banging on them and waking me up when I am trying to sleep.”

“We cannot ask our fellow man or women to sleep in such devices but neither should we expect them to sleep on the streets. The devices are about raising awareness simply and they certainly have got heads turning. There are a number of health and safety factors that concern me regarding the ‘PODS’.” 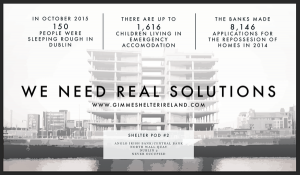 The group who set up the ‘pods’ have urged people to sign a petition calling on the Government to act. They state that recent, regressive policy decisions have resulted in a social housing shortage and an increased risk of homelessness for people in vulnerable situations and that homelessness is not an accident.

They state that in the mid-1970s, social housing made up 33% of all newly built houses.

Yet, during the housing boom in the early and mid 2000s, social housing never reached 10% of total housing output. The 2015 budget included the first substantial provision for spending on social housing in many years.

They conclude that a longer term vision is required for sustainable housing policy which prevents this type of crisis from ever happening again. 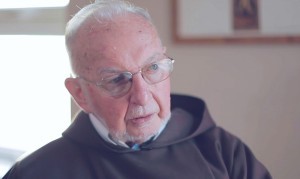 The issue of homelessness was touched on in the party leaders’ debate on Monday night on RTE1.

The Peter McVerry Trust commented that between the 1st leaders’ debate on TV3 and Monday night’s 2nd debate, 24 adults in Dublin would have presented as homeless for the first time – six people per day.

Yesterday, The Journal reported that Brother Kevin Crowley of the Capuchin Day Centre had called on whoever forms the next government to address housing crisis.

He released statistics which showed that between 2011 and 2015, the Capuchin centre saw a 40% increase in the total number of meals served and food parcels distributed.

He highlighted that there has been an 82% increase in children attending for meals. In 2011, some 4,389 children were having meals at the centre – and that figure today is 8,000.