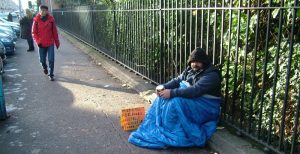 Homeless campaigner Fr Peter McVerry has said he would like to see the country’s homeless emergency services inspected by the Health Information and Quality Authority and for HIQA to produce a report on its findings.

The Jesuit priest made his comments on RTÉ TV’s Prime Time on Thursday evening in an exchange with the Minister of State for Housing and Urban Development, Damien English.

Asked if he thought the emergency services system was fit for purpose, Fr McVerry responded, “Absolutely not. I work in our drop-in centre and I hear all the frustrations from homeless people.”

He related how those seeking emergency accommodation often had to ring the Freephone number in the afternoon, only to be told to ring back again at 10.30 p.m. to then find out that there were no beds available for them.

Fr McVerry related how the Dublin Region Homeless Executive (DRHE) had told a man who had become homeless for the first time on Wednesday evening that they would only offer him a sleeping bag, as they could not provide him with emergency accommodation without the Gardaí verifying his identity.

As the man in question had no ID with him, Fr McVerry said it would be pointless for him to go to a Garda station. Citing protocols, the DRHE said there was nothing they could do for him except offer him a sleeping bag.

“I said ‘Are you serious? In this weather?’” the Jesuit recalled, He highlighted how on Wednesday night temperatures had dropped to −3 °C.

However, on Prime Time, Minister Damien English said, “There are enough beds in the system; we have put an extra 250 beds into the system since October.”

There are believed to be about 140 rough sleepers nationally.

The Minister said the DRHE had confirmed that there was a bed for the man Fr McVerry was helping but Minister English insisted that there are protocols that have to be followed.

However, Fr McVerry said there were enough emergency beds at the moment because camp beds were being put up in hostels, but during the rest of the year the lack of emergency beds was “a major problem”.

He continued, “The other problem is that a lot of people don’t feel safe going into emergency one-night hostels because they get robbed, they get assaulted, they are offered drugs – they just don’t feel safe. I would like the emergency services to be inspected by HIQA.”