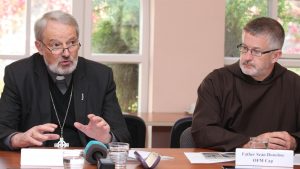 Bishop Kevin Doran of Elphin, acting chair of the Council for Justice and Peace, speaking beside Fr Sean Donohoe OFMCap, Co Director of the Capuchin Day Centre in Dublin, at the launch of ‘A Room at the Inn?’ in Maynooth. Pic John Mc Elroy.

The bishops have urged the public to reject the current situation in which families are forced to live in overcrowded B&B, hostel or hotel rooms while others are sleeping in wet shopfronts and older couples haven’t the means to heat their home.

In their new pastoral letter on the housing and homelessness crisis titled ‘A Room at the Inn?’, the bishops have called on Irish society to commit itself to building a culture that cherishes all human life by working towards the provision of warm, decent, affordable and secure homes for all.

“There is no social or moral justification, no justification whatsoever, for a lack of housing,” they state, quoting Pope Francis.

Catholic social teaching, they stress, demands justice for citizens who have been denied the right to housing.

The reality of the homeless and housing crisis is that families with young children in temporary accommodation are sleeping in cramped, unhygienic and unsuitable conditions, while many adults are sleeping outside, exposed to the elements or in emergency hostels.

“These people without homes, or whose housing is inadequate, like all human persons, have an intrinsic worth. The system which gives rise to forced homelessness, or which allows for the continuance of inadequate, unaffordable and insecure housing, must be viewed as an assault on human dignity,” the bishops criticise.

Speaking to Catholicireland.net, Bishop Kevin Doran, acting chair of the Catholic Bishops’ Council for Justice and Peace, who launched the pastoral letter, said its intention was “like throwing a brick into a pond – the ripples are supposed to go out and we would hope that by publishing this pastoral letter, that diocesan communities and parish communities and religious groups will reflect on it and see what they can do in their own places.”

In the pastoral letter, the bishops say that they wish to write about this issue because the Church, in its service of those affected by the housing crisis, “sees and experiences, on a daily basis, the traumatic effects of this situation”.

“The crisis is not abating, and the immediate effects of this situation on the wellbeing of individuals and families in our society are of urgent and deep concern to us as Catholic bishops. As the number of people affected by the housing and homelessness crisis increases, we urge a renewed commitment on the part of government to addressing this crisis.”

One of the recommendations made by the bishops is that the provision of housing should not be left solely to the market. Housing should not be treated in the same way as any other commodity, the bishops stress and add that housing policies should recognise the rights of families and seek to bring about greater equality in our society.

“Homelessness is one of the most destructive, unacceptable and inevitable outcomes of the housing crisis.”

They urge the government to take action to increase the supply and reduce the price of housing for purchase.

They also call for “an urgent and substantial increase in social housing provision” and for the problems in the private rental sector to be addressed to ensure fair prices and security of tenure.

Elsewhere they call for the accommodation needs of the Travelling community and of asylum seekers to be addressed in any national housing strategy.

Housing provision, they underline, should not be considered in a vacuum. “Its provision should and can take account of environmental sustainability, the use of proper building standards to ensure quality of living for occupants, an awareness of rural and urban development policies, and a commitment to ensuring that those employed in the construction sector can work in safe, secure and fair working environments.”

They also warn that energy poverty is widespread in Ireland and many are living in substandard or minimal standards for accommodation.

Speaking about the role of the private sector in the provision of housing over the past twenty years, Bishop Doran said it had “clearly not worked” and resulted in “houses being turned into a commercial commodity at the mercy of the market and the priority then becomes profit.”

He said one of the aims of the pastoral letter was to “encourage our parishes to make sure that they have a policy in relation to vacant properties which includes the possibility of their being available for housing”.

The number of people who are living in emergency accommodation more than doubled in Ireland between January 2015 and July 2018 from a total of 3,845 to 9,891, with the number of families increasing more than four-fold.

There are now 1,778 families with 3,867 dependents living in such accommodation. Almost one in three of those now registered as homeless are children.

Fr Seán Donohoe OFM Cap, co-director of the Capuchin Day Centre in Dublin city which Pope Francis visited at the end of August, explained how the centre currently feeds up to 700 people a day and provides 350 breakfasts.

According to the friar, the homeless situation “is getting worse. Our numbers are growing,” he warned and said the problem is set to worsen before it improves.

He explained that one woman who comes to the centre ended up in a homeless hub after her house went on fire. “She has three children and she has to get two buses every morning to get the children to school because she is determined that this will not affect the children’s education.

“She walks about town for the day and they come into us with the children for their dinner before they go back to the hub by getting two buses. She is living on leap cards which are supposed to be supplied by the State but they don’t cover what she needs. It is costing her €70 a week in bus fares.”

The full text of ‘A Room at the Inn?’ can be read here: https://www.catholicbishops.ie/wp-content/uploads/2018/10/2018-Oct-01-Bishops-pastoral-letter-on-Housing-and-Homelessness-A-Room-at-the-Inn.pdf