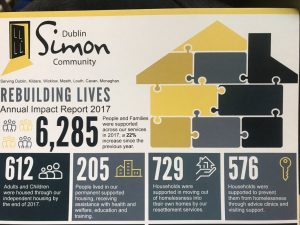 There has been a sharp increase in people facing homelessness in Ireland in the past two years, according to the Dublin Simon Community.

The Dublin-based charity, which serves people in Dublin, Wicklow, Kildare and Meath, released its annual report on 25 September.

In 2017 Dublin Simon Community provided housing, health and support services to 6,285 people – a 22 per cent increase in services on the previous year. The report noted that without the charity’s intervention, an extra 1,637 adults and 1,477 children (1,373 households) would have been forced into emergency accommodation.

Speaking at the report release event at Mansion House, Dublin, CEO Sam McGuinness said that the organisation has been working hard to get people out of homelessness, while also preventing more from becoming homeless in the first place.

“As this crisis advances, there continues to be a surge in people who desperately need help with housing,” he said. “In order for this work to continue, additional housing must be delivered at a more accelerated rate. We are encouraged by the ongoing cooperation and inter-agency working among approved housing bodies, local authorities, government departments and other service providers, which we believe is essential to meet this challenge head on.”

He also said that housing alone is not the only answer.

“We have, over the past 21 months, continued to take an innovative approach to helping people rebuild their lives, providing lifesaving medical treatment, recovery, counselling and support services,” he said.

Actions included opening the Step Up Step Down facility this month and providing 12 additional beds, giving short term semi-acute healthcare interventions, treatment, investigations and observations for people who are homeless or recently homeless.

“This facility is part of our plan for a homeless specific medical residential treatment and recovery facility at Ushers Island, Dublin 8, which will expand to 100-bed capacity,” Mr McGuinness added. 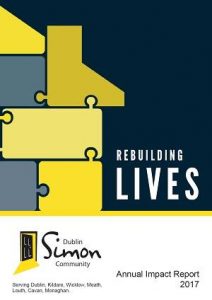 In the area of emergency accommodation and outreach services, Simon increased bed capacity by 37 per cent by providing an additional 42 emergency beds.

Some 1,533 people were provided with housing assistance, harm reduction and medical services by the rough sleeper team.

Simon was also involved in providing addiction treatment, recovery and counselling services. These included 684 people were provided with treatment services, a 24 per cent increase on the previous year.

Around 2,250 hours of 1:1 counselling and mental health support were received by clients accessing Sure Steps Counselling, a 5 per cent increase since 2016. There were 665 GP consultations at the mobile health unit, in partnership with Safetynet Primary Care.

This year Simon has expanded its services into Cavan, Monaghan and Louth.