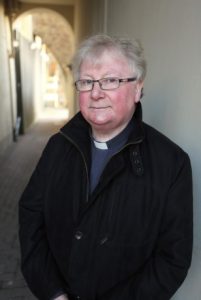 A prominent human rights campaigner, author and cleric in Northern Ireland has vowed to remain in his parish despite a sectarian attack on his home this week.

Author of the book, Taking A Stand, Fr Joe McVeigh returned to his parochial home in Lisbellaw in County Fermanagh this week to find his windows smashed in an incident the Police Service of Northern Ireland (PSNI) is describing as a hate crime.

Speaking about the incident this week to the Irish News newspaper, Fr McVeigh said: “When I drove up I noticed one of the windows smashed and immediately thought there had been a burglary, but then I noticed two other windows had been smashed as well and there was nothing disturbed in the house.”

He continued: “They are quite tough windows. They are double glazed and would take a bit of force to break and there were no bricks or anything lying about.”

He added: “It’s not a nice thing to happen and it would worry you of course, but I don’t want to move. I will have to look at getting some added security around the house though. I’m a Catholic priest in a very loyalist village – but I’ve had no trouble up to now, apart from some Union flags put up on my gate.”

Fr McVeigh also revealed that he has received huge support from the community, and in particular from many members of the Church of Ireland community. Addressing his attackers, Fr McVeigh said “It’s a pity you have to resort to this. There’s no need for it. I’d love to talk to you about whatever’s hurting you. If it’s not vandalism, it’s something against me personally or just a Catholic priest being here. I’d like to talk”.

Local Sinn Féin MLA, Barry McElduff, who is a personal friend of Fr McVeigh, also criticised the attack. He said that “Fr McVeigh has been a champion of human rights and social justice for decades and has many many friends both across Ireland and as far away as the United States where his work on social issues is well known. While this is a terrible thing to have happened, I have spoken to him and he is aware that he has the support of many people.”