Kilmore diocese is getting behind the Year of the Holy Name of Jesus with a celebration of a Triduum of Prayer from 11-13 July.

It is part of the pastoral plan for the year, and the event is being promoted far and wide and parishes all over the diocese have been sent posters and encouraged to attend the event at St Mary’s Church, Staghall, Belturbet, in the Parish of Drumlane.

The Bishop of Kilmore Leo O’ Reilly will be the main celebrant at the Mass on Sunday.

“It is something different,” Seán Coll, Director, Kilmore Diocesan Pastoral Centre, told CatholicIreland.net. “We are hoping to reach out to people, to where they are at.”

He hopes it will give people pause for thought about the Name of Jesus and how they use it and perhaps try to be more respectful in an age when taking the Holy Name is part of the vernacular.

“Really it is about people deepening their relationship with a personal Christ,” said Seán Coll. “The speaker will also give food for thought.”

So while the Triduum may resemble a parish mission with a preacher or speaker each night – he will not be thumping the pulpit in the traditional way.

Fr Liam McCarthy is the speaker from the Franciscan community in Galway. He has ministered in Belfast for nine years and for thirteen in Zimbabwe, having studied in Galway, Louvain and Rome.

2014 is the Year of the Holy Name of Jesus in Ireland for Franciscans and the Poor Clare Federation and the wider Franciscan family. They have had a new icon written for the occasion and it is hoped that this will make it to Kilmore for the Triduum. 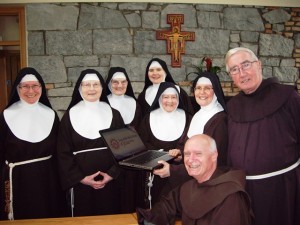 This icon was unveiled during the opening Mass for the Holy Name year, in January and it depicts the person of Jesus and the monogram of the Holy Name.

“We believe this is a devotion which is very relevant to the times we are living in. People are really struggling, between sickness, financial worries and depression and are looking for some way to find serenity in their lives,” Sr Colette, Mother Abbess of the Galway Poor Clare Community said.

“Simply calling on the Name of Jesus with trust from the heart, brings His Presence and His power into the situations in our lives that we struggle with. It is the utter simplicity of this devotion which is so appealing” Sr Colette, explained after the opening Mass for the special year.

Several events are taking place throughout the year which began with that opening Mass celebrated on 3 January.

All present were surprised and delighted when Fr Aidan McGrath OFM, Secretary General of the Franciscan Order worldwide, announced that Pope Francis has granted the status of a Jubilee Year to their celebrations.

A new wave of the devotion to the Holy Name of Jesus began in 1914 through a spiritual collaboration between the Poor Clares and Franciscans and was further developed by other branches of the Franciscan family.

In the same week that the Pope declared a Jubilee Year and approved an indulgence, the Pontiff tweeted, “We cannot think of a Church without joy. This is the joy of the Church: announcing to all the Name of Jesus”.

In May, the Papal Nuncio, Archbishop Charles Brown, helped launch a new range of the blue IHS tiles.

The tradition dates back to St Bernardine. The tile with the IHS, from the shorten form of the name of Jesus in Greek, is put in place as a sign of faith and of the Lord’s protection and blessing. The tradition was taken up in Galway in 1914 by a Franciscan, Fr Francis Donnelley.