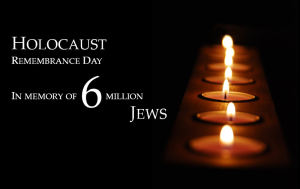 Seventy years after the end of World War II and the Holocaust, President Michael D Higgins said it remains “an atrocity which we regard and remember with horror, revulsion, and disbelief”.

Speaking at the Mansion House in Dublin on Holocaust Memorial Day, the President said “We owe so much to the survivors of that atrocity, who continue to bear witness to the terrible inhumanity that can emerge from hatred, prejudice and intolerance.”

Six candles ​in remembrance ​of the six million Jews ​who​ died in the Holocaust were lit by descendants and relatives on Sunday​.

In his address, President Higgins asked people to remember ethically.

This entails committing to facing, opposing and exposing any and all incipient forms of racism, distortion of sacred texts and invitations to hate, such as the recent atrocities in Paris.

Thanking Education Trust Ireland for inviting him to join the commemoration, the President said it was important to remember the eleven million people, including six million Jews, who lost their lives in the concentration camps of Europe.

“The late French philosopher Paul Ricoeur has said that ‘To be forgotten is to die twice’ and as humanitarians and fellow human beings, we have a duty to preserve the memory of the many people who lost their lives so shockingly and so tragically,” President Higgins stated.

He recalled that in 2000, Ireland signed the Stockholm Declaration and, in doing so, as a nation undertook, along with other European partners and the wider international community, to ensure that the victims of the Holocaust would be remembered.

“Today, gathered here together, we give witness to that commitment.”

He said the gathering in the Mansion House in Dublin was honoured that some of the survivors of the Holocaust were with them for the evening.

“They have, over the years, acted as witnesses to the horrors of the past and, through their actions they have helped to educate successive generations about the brutal consequences that flow from individuals, groups, cultures, belief systems being chosen as targets for hate and even genocide.”

“While this is a solemn occasion of remembrance, during which we are commemorating a very horrific set of events in European and world history, we must also remember that there is light,” he said.

“There is good to be found in the world, and there are good people who will stand against hatred, destruction and intolerance and will carry the torch of truth and light with them.”

The President said that as we remember the hateful discrimination that led to the Holocaust, and the horrors of that period, we must remember also what emerged from that tragic episode of European history – in particular the resolution of the people of Europe to seek to found a new community of nations and peoples founded on the principles “and values of human rights and human dignity.

I thank you for coming here, and for all that you do, and have done, to ensure that we do not forget the horrific events that constituted the slaughter of millions of persons across Europe and the concentrated elimination of specified minorities, nor should we neglect how attitudes and assumptions, left unchecked, made their own contribution to the events we recall.”

The Minister for Foreign Affairs and Trade, Charlie Flanagan, who also attended the National Holocaust Memorial Day commemoration said, “The Holocaust was a crime against humanity on a scale that today we find difficult to comprehend.”

He added that the Holocaust Education Trust fulfils a very important role in combating intolerance by ensuring that the harrowing suffering and atrocities of the Holocaust are remembered, and the lessons learned are not forgotten.

“Today’s important ceremony honours the memory of the eleven million men, women and children who were systematically and brutally murdered in the Holocaust. Those who lost their lives included six million Jews and five million more people murdered because of their nationality, ethnic origin, disability, sexual orientation, political affiliations or religious beliefs.”

Minister Flanagan gave a reading of the Declaration of the Stockholm International Forum on the Holocaust (2000), the founding document of the International Holocaust Remembrance Alliance (IHRA), which sets out members’ commitment to supporting Holocaust education, remembrance and research.

“I am deeply honoured to have been invited to read the text of the Stockholm Declaration at this evening’s commemoration and to reaffirm the Irish Government’s commitment to its principles. The Declaration calls upon us to ‘remember the victims who perished, respect the survivors still with us, and reaffirm humanity’s common aspiration for mutual understanding and justice’,” Minister Flanagan said.