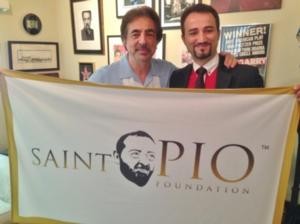 The US-based St Pio Foundation has said it is “extremely honoured” to announce that acclaimed Hollywood actor, Joe Mantegna, has agreed to become a Goodwill Ambassador for it.

Joe Mantegna is an Emmy and Tony Award winning actor, as well as producer, writer and director.

He is famous for his star role in the movie ‘The Godfather III’ and he is currently starring in the hit CBS television series ‘Criminal Minds’ as FBI Supervisory Special Agent David Rossi.

The actor is the national spokesperson for a fundraising campaign which is seeking to raise money to build a National Museum of the United States Army in Washington.

He has also been co-host of the National Memorial Day Concert since 2006.

Joe Mantegna said he was endorsing the St Pio Foundation’s work in support of the US Archdiocese of the Military Services to reinforce his commitment to veterans and the military.

The archdiocese was created by St Pope John Paul II and is currently led by Archbishop Timothy P. Broglio.

The diocese provides pastoral ministries and spiritual services to those in the United States Armed Forces.

This includes more than 220 installations in 29 countries, patients in 153 medical centres and federal employees serving outside the boundaries of the USA in 134 countries.

Numerically, the Archdiocese of the Military Services in US is responsible for more than 1.8 million men, women and children.

“I am very delighted to provide my personal support to the St Pio Foundation and the Archdiocese of the Military Services in US, providing the much needed spiritual guidance, faith and support to those millions of heroes who serve our country, which is so very important,” the actor said of his appointment.

He added, “Padre Pio is one of the most acclaimed saints of the Holy Church and he himself served in the Italian Military Forces for a short period of time.”