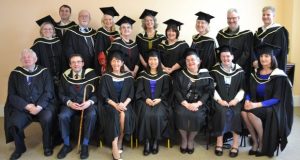 First Graduates in Spirituality from Institute of Technology (pic courtesy of jesuits.ie)

SpIRE has been established to serve the spiritual seeking of people, contribute to the academic study of spirituality in higher education colleges, and promote the phenomenon of ‘spirituality and’.

SpIRE aims to develop contemplative and critically informed spirituality guides, reflective practitioners and skilled researchers regarding contemporary spiritual issues and the journey of life in its spiritual dimension and connection. It gives effect to its aims through education, research, training, consultancy, publishing, networking and collaborating across countries and in Ireland.

Dr Michael O’Sullivan SJ has been the Director of this MA since 2005, first at Milltown Institute, NUI, then at All Hallows/DCU, and currently at WIT with the hosting and support of SpIRE in Dublin. He wrote the approved programme with Bernadette Flanagan for DCU, and a revised version for WIT in collaboration with Dr Richard Hayes, then head of the School of Humanities.

Speaking at the graduation ceremony, Dr Michael O’Sullivan said he was particularly impressed by the achievement of this year’s graduates. “The results for this MA class in Applied Spirituality were of a very high standard,” he says, adding, “Two of our graduates both graduated with first class honours in their BA.”

Along with Michael O’Sullivan, SpIRE is run by Professor Bernadette Flanagan and Sr Anne Marie Dixon, who are also on the leadership team of the Waterford Institute of Technology MA. This November in Boston, Bernadette Flanagan will become the first Irish person ever to be elected President of the global professional society for the study of Christian Spirituality as a transformative academic discipline.

Dr O’Sullivan says he will continue to work “on the frontiers of change contributing to the further development of spirituality as an applied academic discipline.” He and Professor Flanagan, along with colleagues in SpIRE and colleagues at Waterford Institute of Technology, are organising the first international conference in this country on ‘Pilgrimage and the Evolution of Spiritual Tourism’ to take place in WIT in March 2018.

The MA class consisted of 18 lay people, 1 diocesan priest, 1 religious order priest (MSC), and 1 sister (FMM). Twenty graduated on 1 November, while one student had to defer her dissertation module and will graduate next year.