First ever 'Adopt a Monument' national competition selects five monuments around the country including Killeshandra’s Church of the Rath. 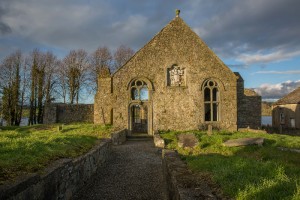 An historical Co Cavan church has been chosen as one of five monuments for the country’s first ever ‘Adopt a Monument’ national competition.

Killeshandra’s Church of the Rath is one of five monuments successful along with four other monuments in Donegal, Waterford, Wicklow and Roscommon.

Over 90 community groups around the country applied to adopt a monument through the scheme, which has been organised by the Heritage Council in conjunction with Abarta Heritage to support public access to Ireland’s archaeological monuments.

Killeshandra Tidy Towns applied to adopt the historic church at the centre of Killeshandra known as ‘Church of the Rath’.

It is from this church that the town takes its name. The church is in need of specialist advice for architectural conservation, and the group would also like to raise awareness about this important site.

Group spokesperson Anne Shanley told the Anglo-Celt newspaper that Killeshandra Tidy Towns committee are delighted to have the old Rath Church included in the scheme.

“For us the scheme has the potential to become a vital cog in our efforts towards the conservation of what we see as an important national monument. We look forward to the professional help we shall receive from being part of the Adopt a Monument Scheme,” she said.

“This will boost our efforts and give recognition to the site and ensure that essential building conservation works are undertaken. We will also put into place a community led management and biodiversity plan for the historic site.”

The town of Killeshandra takes its name from the Irish, Cill na Seanratha, interpreted into English as the Church of the Rath.

The original church was built upon what was once an old hill fort overlooking the town lough.

Papal calendars dated from the 14th century state that the church was then a dependency of the Drumlane Augustinian priory and John McKiernan was the cleric appointed there.

According to Ian Doyle, Head of Conservation at the Heritage Council, “Around every corner in Ireland you can discover an echo of the past. The five monuments selected in the ‘Adopt a Monument’ scheme demonstrate the rich tapestry of heritage that we live alongside in Ireland.”

“We know that the public has a great interest in archaeology and, through this scheme, we want to provide opportunities to support public access to the often hidden world of archaeology.”

“For the five successful monuments, the scheme has the potential to ensure ongoing maintenance and care, greater protection through increased civic value, and much higher standards of interpretation and understanding.”

“I want to extend my congratulations to the community groups involved, and to encourage the public to visit the monuments in their region in 2016.”