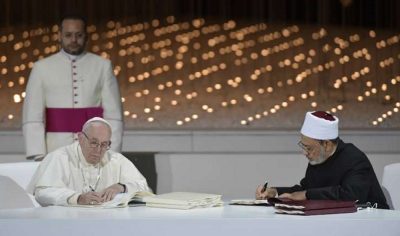 At the General Audience on Wednesday Pope Francis assessed his recent three-day trip to the United Arab Emirates, which began on 3 February, referring in particular to the Document on Human Fraternity which he signed together with the Great Imam of Al-Azhar, “in which together we affirm the common vocation of all men and women to be brothers, in as much as sons and daughters of God; we condemn every form of violence, especially that clothed with religious motivations, and we commit ourselves to spread genuine values and peace in the world”.

This document will be studied in the schools and universities of several countries, continued Pope Francis. “However, I also recommend that you read it, know it, because it gives such a spur to go on in the dialogue on human fraternity.

“At a time like ours, in which the temptation is strong to see a clash break out between the Christian and the Islamic civilizations, and also to consider religions as sources of conflict, we wished to give a further clear and determined sign that, instead, it’s possible to meet with one another, it’s possible to respect one another and dialogue and that, although in the diversity of the cultures and the traditions, the Christian and Islamic worlds appreciate and defend common values: life, the family, the religious sense, honour for the elderly, the education of young people and still others.”

The historic document, signed by the two leaders on Monday, calls for peace between all nations, and was signed in front of a global audience of religious leaders from Christianity, Islam, Judaism and other faiths.

Pope Francis and Sheikh Ahmed al-Tayeb, the head of Sunni Islam’s most prestigious seat of learning, arrived hand in hand at the ceremony in Abu Dhabi in a symbol of interfaith fraternity.

In the eight-page document, the two leaders call upon themselves, “upon the leaders of the world as well as the architects of international policy and world economy, to work strenuously to spread the culture of tolerance and of living together in peace; to intervene at the earliest opportunity to stop the shedding of innocent blood and bring an end to wars, conflicts, environmental decay and the moral and cultural decline that the world is presently experiencing.

“We therefore condemn all those practices that are a threat to life such as genocide, acts of terrorism, forced displacement, human trafficking, abortion and euthanasia. We likewise condemn the policies that promote these practices.”

Religions must never incite war, hateful attitudes, hostility and extremism, nor must they incite violence or the shedding of blood, says the document. “These tragic realities are the consequence of a deviation from religious teachings. They result from a political manipulation of religions and from interpretations made by religious groups who, in the course of history, have taken advantage of the power of religious sentiment in the hearts of men and women in order to make them act in a way that has nothing to do with the truth of religion.”

This is done for the purpose of achieving objectives that are political, economic, worldly and short-sighted, they continue. “We thus call upon all concerned to stop using religions to incite hatred, violence, extremism and blind fanaticism, and to refrain from using the name of God to justify acts of murder, exile, terrorism and oppression. We ask this on the basis of our common belief in God who did not create men and women to be killed or to fight one another, nor to be tortured or humiliated in their lives and circumstances. God, the Almighty, has no need to be defended by anyone and does not want His name to be used to terrorize people.”

Addressing journalists on his return from the UAE, Pope Francis said that the Document on Human Fraternity was done in the “spirit of Vatican II”.