The crucifix predates St Mary's Church, Enniskerry, and was used as an object of devotion when parishioners celebrated Mass in “Mrs Dixon’s barn”. 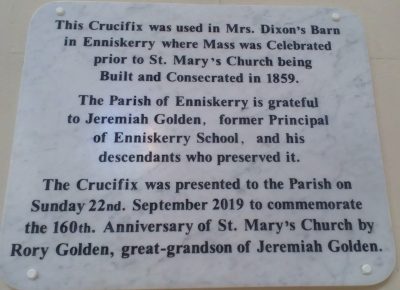 An antique treasure was returned to the parish of Enniskerry in Co Wicklow in the weekend – the same weekend that it celebrated the 160th anniversary of its church.

The treasure in question is a crucifix that predates the building of the church in 1859. It was used as an object of devotion when parishioners held Sunday Masses in what was known as “Mrs Dixon’s barn”.

After St Mary’s Church was built, the crucifix wasn’t wanted for its internal decor, so it was given to the parish schoolmaster Jeremiah Golden, who presumably had it on display in Enniskerry National School.

Since then, the religious object has been in the possession of the Golden family. However, this weekend, to help mark St Mary’s 160th anniversary, the crucifix was presented to the parish by Jeremiah’s great-grandson, Rory Golden, who lives in Bray.

Standing about 34 inches tall, the cross of the crucifix is made of timber and the Christ figure is made of a brass alloy.

“It is a beautiful thing and we are delighted to have it,” said parishioner James Byrne. “It is now on display on a wall in the church with a plaque beneath it explaining its provenance. The figure is very detailed, especially the hands and feet. It is a lovely thing.”

The crucifix took pride of place in a procession of parish artefacts that preceded yesterday’s Mass celebrating St Mary’s 160 years at the heart of Enniskerry’s parish community. After the Mass was celebrated, the crucifix was accepted by Fr Bernard Kennedy on behalf of parishioners.

Yesterday’s Mass was the culmination of a series of events marking the anniversary, with highlights including a history talk by Michael Seery and a flower show that resulted in St Mary being wonderfully decorated for yesterday’s anniversary Mass.

According to Mr Seery, barn-owner Margaret Dixon was quite a village character in her time. Widowed at the age of 42 in 1814, Mrs Dixon continued to maintain what was her husband’s landholding. In 1848, at the age of 76, she pleaded hardship to the local landlords, the Powerscourt family. Not only did she avoid eviction, she was granted a rent reduction and had her rent arrears wiped out. She made most of her good fortune by living on until 1872, dying at the age of 100.