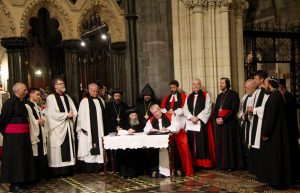 The co-chairs of AOOIC, Rev Gregory K Cameron and Metropolitan Bishoy, sign the Dublin Agreement in Christ Church Cathedral as members of the Commission look on. Pic: Courtesy United Dioceses of Dublin & Glendalough.

Christ Church Cathedral in Dublin was the venue for the signing of a historic agreement on the Holy Spirit between the Anglican and Oriental-Orthodox Churches.

The ‘Dublin Agreement’ is the result of two years’ work by the Anglican Oriental-Orthodox International Commission.

The agreement was signed during choral Evensong at the cathedral by the co-chairs of the Commission, Rev Gregory K Cameron of the Anglican Church in Wales and Metropolitan Bishoy of the Oriental-Orthodox Coptic Church.

The meeting was hosted by the Archbishop of Dublin and Glendalough Dr Michael Jackson, who is a member of the Commission.

A copy of the Dublin Agreement was presented to the Dean of Christ Church Cathedral Rev Dermot Dunne by the co-chairs of the ecumenical commission and it will be displayed in the cathedral.

This was the sixth meeting of the Commission since its foundation in 2001.

Among these is the issue of Christology, which divided the Church at the Council of Chalcedon in 451 AD, leaving the Oriental-Orthodox Churches and the Byzantine and Western Churches separated from one another.

“These tragedies have made their way into our theology and into our prayer. These atrocities have famed our discourse and our compassion. These human and civic devastations have helped to give a contemporary urgency and tragic vibrancy to our reflections,” Archbishop Jackson said in his sermon.

He said this was made all the more poignant by the fact that members of all of these Churches live in Ireland.

He referred to the ecumenical service held in the Coptic Orthodox Church of St Maximus and St Domatius in Drumcondra on Wednesday evening. “We and they together are also one family. We all know one another,” the Archbishop stated.