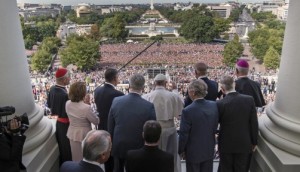 Pope Francis became the first Pope to ever address a joint session of the US Congress with a speech in which he addressed issues such as fundamentalism, the refugee crisis, abolition of the death penalty, environmental concerns, the arms trade and threats to the family.

Discussing immigration, the Pope told his listeners that most Americans are the children of immigrants, and he urged them to think of new immigrants as people who, like their own forebears, are simply seeking a better life for their children.

“Our world is facing a refugee crisis of a magnitude not seen since the Second World War. This presents us with great challenges and many hard decisions,” he said.

“On this continent, too, thousands of persons are led to travel north in search of a better life for themselves and for their loved ones, in search of greater opportunities. Is this not what we want for our own children?” he challenged.

“We must not be taken aback by their numbers, but rather view them as persons, seeing their faces and listening to their stories, trying to respond as best we can to their situation. To respond in a way which is always humane, just and fraternal,” the Pope urged.

“We need to avoid a common temptation nowadays: to discard whatever proves troublesome. Let us remember the Golden Rule: “Do unto others as you would have them do unto you” (Mt 7:12).”

Elsewhere in his address to the Congress in Washington, the Pontiff said, “If we want security, let us give security; if we want life, let us give life; if we want opportunities, let us provide opportunities. The yardstick we use for others will be the yardstick which time will use for us. The Golden Rule also reminds us of our responsibility to protect and defend human life at every stage of its development.”

Decrying the rise of religious fanaticism, the Pontiff said, “We know that in the attempt to be freed of the enemy without, we can be tempted to feed the enemy within. To imitate the hatred and violence of tyrants and murderers is the best way to take their place.”

Towards to the end of his speech, the Pope reminded Congress that the primary purpose of his visit to the US was the World Meeting of Families.

He said that the family would be “a recurrent theme” of his public talks during this week’s visit, and he lamented that the family “is threatened, perhaps as never before, from within and without.”