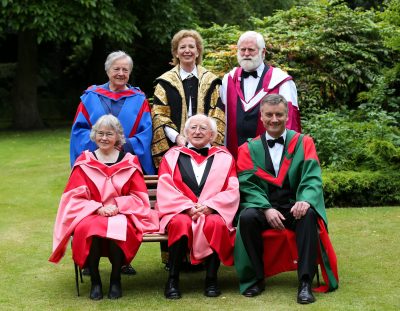 He said Sr Margaret championed “that larger dimension of history, that seeks to reconcile and synthesise the past, rather than divide people into camps and set antitheses between ethnic groups and religious sects”.

Born in 1929 in Cork, Sr Margaret received a BA from UCC prior to joining the Dominican Order in 1950.

She held several positions within the Dominicans including Prioress of Sion Hill Convent.

In 1964, she earned a PhD in history and she became a lecturer in the Irish History Department of UCD from 1964, a position she held until she retired in 1994.

She was also a professor at the School of Irish Studies in Dublin from 1972 to 1989.

She held the Burns Chair of Irish Studies at Boston College from 1992 to 1993. She was awarded the Eire Society of Boston Gold Medal in 1993 for her writings on Irish women’s history.

Sr Margaret campaigned for various causes including the abolition of corporal punishment in schools and children with special educational needs, and against the development of the Viking settlement at Wood Quay, domestic violence and apartheid. She was one of those who brought Rosie Hackett to national attention.

She chaired the National Archives Advisory Council from 1997 to 2002 and was a member of the editorial board of Field Day IV and V, which highlighted the literary contribution of Irish women writers, poets and commentators.

Writing on the Dominican Sisters’ website, Sr Margaret recalled that she was preparing for her First Communion when she first got the sense that she might become a nun.

“Religious vocation was a little persistent voice in the background throughout my childhood. A long illness, diphtheria, at the age of nine confined me to a rundown fever hospital with no visitors allowed for months. As a result, my thoughts turned to God, especially when one of my companions in that bleak ward died. The experience was to have a profound effect on my resolve to become a nun.

“The prayers of St Thomas Aquinas are among my favourites, they get to the heart of living, the need for humility, to simplify, to start with what is easy and to go on to the more difficult task. This was one of his maxims I used when teaching – he was a great teacher and funny also.”

Studying for a Master’s degree in history, her supervisor was Dudley, who she has described as “famous and eccentric”. She completed a thesis on a 17th century Dominican, Fr Dominic O’Daly in two years, while teaching full time.

“Dudley Edwards wanted me to complete a full study of my topic and arranged with my superiors that I would research continental archives beginning with the famous Secret Archives of the Vatican. On my return to Ireland, I was invited to take some tutorials and lectures and eventually I joined the History Department in UCD as a lecturer.

“Meanwhile the Second Vatican Council (1962–64) brought profound change to religious life for women, a growing sense of human rights, a realisation of mission to the poorest, an invitation to challenge inequality such as apartheid in South Africa where the Dominican Sisters worked.

“For me being in UCD where a new generation of students made me aware of their rights meant siding with them or opposing them. In making a decision to support students’ demands, I gradually became aware of other inequalities, such as the position of women worldwide. My determination to write women into mainstream history, though resisted for years, has succeeded beyond my wildest dreams!” Sr Margaret said.